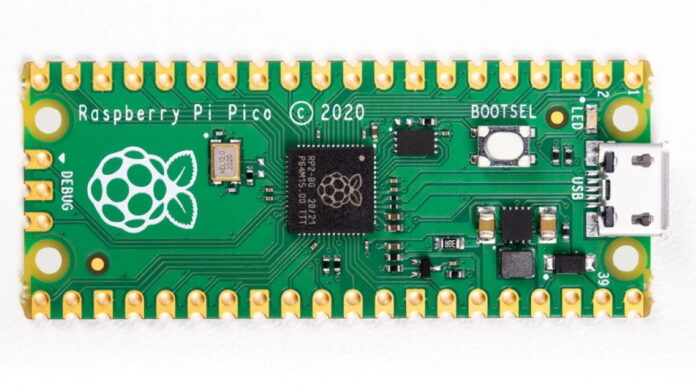 A very low-cost, high-performance microcontroller to embed in all your hardware projects.

As James Adams, COO of Raspberry Pi Trading, explains the Raspberry Pi blog, the new board uses a new chip called the RP2040 developed internally. It’s intended for use in a wide range of scenarios from controlling light to interacting with sensors, electric motors, or just about any other electronic component you can imagine.

The tiny board measures 21-by-51mm, but includes the RP2040 chip (a dual-core ARM Cortex M0+ processor running at up to 133MHz), 2MB of Flash memory, 26 multifunction GPIO pins including three analog inputs, two UART, two SPI controllers, two I2C controllers, 16 PWM channels, and a USB 1.1 controller. There are also eight programmable I/O state machines allowing for custom peripherals, an accurate on-chip clock, temperature sensor, and low-power sleep and dormant modes. The module can be soldered directly on to another board if desired.

The Pico is designed to offer a low barrier to entry for hobbyists and beginners alike. There’s full support for programming in MicroPython or C/C++, with the ability to drag and drop code over to the Pico using the USB port. There’s detailed documentation already available about the board specification and how to get started with MicroPython or C/C++ programming, and a new book called “Get started with MicroPython on Raspberry Pi Pico” offers a full guide and projects for all the Pico’s features.

The Foundation has also worked with other hardware manufacturers to support the Pico with a range of accessories. They will be made available by Adafruit, Arduino, Piminori, and Sparkfun. The most interesting so far has to be the Piminori PicoSystem, which uses the Pico at the heart of a handheld game-making device and includes the software and examples to make creating games easy.