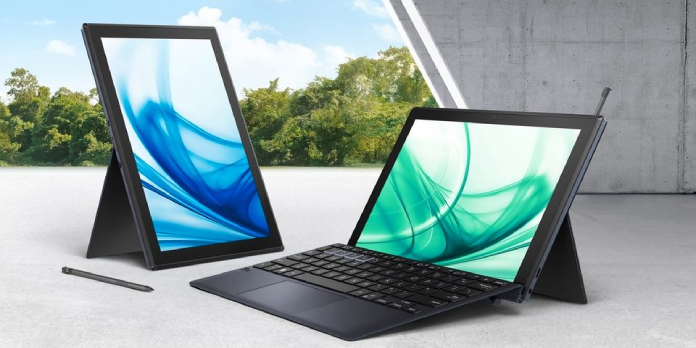 The Asus ExpertBook B3 Detachable is a Windows 2-in-1 notebook with a Snapdragon processor, a pen, and an antibacterial keyboard.

The Asus ExpertBook B3 Detachable is the company’s latest Windows 2-in-1 gadget, and it appears to be a viable competitor to Microsoft’s Surface Go 3. While Apple tries to persuade people to buy an iPad as their next laptop, companies like HP, Acer, and Lenovo have produced detachable 2-in-1 Windows laptops that can also be used as tablets for years.

Microsoft sells a couple of 2-in-1 laptops under the Surface name. The cheapest is the Surface Go 3, a 10-inch tablet that starts at $399. The 13-inch Surface Pro 8 starts at $899 and is a terrific option for anyone looking for a high-end gadget with a lot of power. Students, creatives, business executives, and even athletes will benefit from these computers.

Also See:  How to Get the Google TV UI on Android TV Devices Right Now

The Asus ExpertBook B3 Detachable isn’t the lightest or thinnest 10-inch tablet on the market. Thick bezels surround the display, and the frame has a tapered edge. The Asus Chromebook Detachable CM3 appears to have influenced the 2-in-1’s optional stand cover. Unlike other stand covers, which can only prop up a device in landscape mode, this one can prop up a device in landscape and portrait modes. The spill-resistant keyboard cover, an optional accessory, also contains an antibacterial guard to prevent germs growth. The Ergolift hinge tilts the keyboard while attached to the tablet, making typing more comfortable.

Windows 11 is supported by the ExpertBook B3

The ExpertBook B3 has a 10.5-inch IPS display with a 1920 x 1200. It also offers a brightness of 320 nits, which should be sufficient indoors and bearable outside. The Qualcomm Snapdragon 7c Gen 2 chip powers the computer, which will be available in 4GB and 8GB RAM configurations with 64GB or 128GB of eMMC storage, according to Asus. There’s a 5-megapixel noise-reducing camera on the front that uses AI noise-canceling technology to make calls crisper. A 13-megapixel back camera is also included. While the front-facing camera doesn’t appear to have a privacy shutter, the keyboard does have a mute microphone key.

There is also an optional garaged stylus for drawing, writing down notes, or completing spreadsheets, in addition to the keyboard and stain-resistant stand cover. It charges in the silo, and Asus promises that a 15-second charge will give you 45 minutes of use. The ExpertBook B3 includes an audio jack, a single USB-C charging connection, and a 45-watt power adapter. Asus has yet to reveal pricing and availability information. Still, the gadget will come pre-installed with either Windows 11 Pro or Windows 11 Home S. Unfortunately, because of the unknown price, it’s difficult to say whether this will be a better alternative than the Surface Go 3, but it could be.