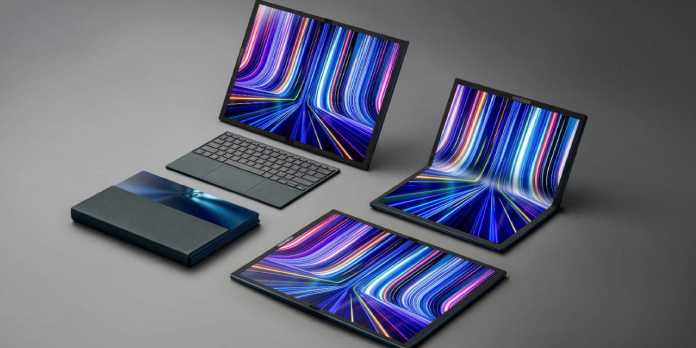 We’re used to seeing convertible laptops and even folding smartphones in huge tech shows like CES, but ASUS debuted a folding device that is particularly eye-catching this year. The Zenbook 17 Fold OLED was launched today by ASUS, and while the name alone makes our ears perk up, it doesn’t describe how ludicrous this laptop is.

To begin, the Zenbook 17 Fold OLED features a 4:3 17.3-inch OLED display, as the name implies. According to ASUS, the display was created as part of a collaboration between ASUS, Intel, and BOE Technology Group. This isn’t your average 17-inch laptop, though, because the display can be split in half to create two 12.5-inch 3:2 1920 x 1280 displays.

Users can slip one-half of the display under the accompanying keyboard to transform the Zenbook 17 Fold OLED into a compact 12.5-inch laptop when the display is folded. According to ASUS, the display can also be wrapped around the keyboard for portability, making it a computer “smaller than a sheet of photocopying paper” (though quite a bit thicker than a said sheet of paper, obviously).

The Zenbook 17 Fold OLED, according to ASUS, features six different modes of operation: PC, laptop, tablet, on-screen keyboard, book, and expand. Some of these usage modes appear to do away with the keyboard entirely, and we anticipate that some will be more popular than others. Nonetheless, the Zenbook 17 Fold OLED will provide more alternatives than a standard 2-in-1 laptop, and the fact that the keyboard can be removed completely means that customers will have to deal with less bulk while using the Zenbook as a tablet.

The Zenbook 17 Fold’s display appears to be particularly good, as ASUS claims it is PANTONE approved and supports Dolby Vision HDR while covering 100% of the DCI-P3 colour gamut. In addition, the machine has a quad-speaker array that supports Dolby Atmos, and the HD IR camera can detect users nearby using AI.

It should be no surprise that the Zenbook 17 Fold will employ Intel’s 12th-generation processors, but we’ll receive the Core i7 U-series instead of the H-series. Because a 12th-generation U-series processor powers this laptop, it will enable WiFi 6E. The Zenbook 17 Fold appears to be available in various configurations, as ASUS claims the machine will include “up to” 16GB of RAM and a 1TB PCIe 4.0 SSD.

Also See:  Report: The Asus ZenFone 8 Pro Will Have a Flip-Up Camera

The Zenbook 17 Fold OLED will be available in the middle of this year, but the manufacturer hasn’t revealed any pricing information yet. While today’s announcement suggests that at least a few configuration options will be available, we anticipate that they will all be costly. The Zenbook 17 Fold OLED is a nice laptop, but such functionality will almost surely come at a high price.

Xiaomi beats Samsung to become number 1 smartphone brand in the...