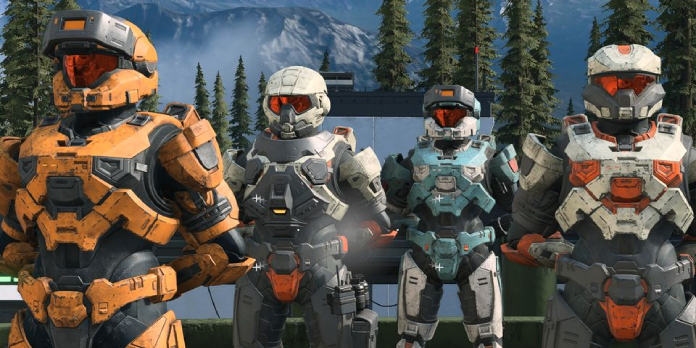 Many Halo Infinite players managed to cram themselves into one of the game’s loot caves, confusing the opposing squad.

The multiplayer in Halo Infinite appears to be receiving excellent feedback in this early iteration. In this beta, the game’s hallmark physics-based action and tight shooter mechanics have returned in full force, and fans have discovered a slew of new features to investigate. While further game modes are still to be released, new additions and gameplay elements, like the grapple hook, have kept experimental gamers occupied, with some hailing the game as a return to form for the franchise.

Recently, Redditor Infenty and his buddies used these amusing features to devise a funny hack to use against their opponents. These gamers hid in an internal nook in one of the game’s maps using Halo Infinite’s Spider-Man like grappling hook and helpful Repulsor tool. In a video posted by Infenty, viewers can see members of the opposition team wandering around aimlessly in the open space below, oblivious to the twelve players camped up a few feet above them.

Some reviewers compared the hiding team’s delighted chuckles and the lighthearted hijinks they appear to be getting into to the days of old Halo. The state of the preceding few entries in the series has left many long-time fans unhappy, owing to a combination of repeated gameplay and a lack of the distinct identity of the early games. Indeed, as proven by the recent petition to bring back the original match announcer for Halo Infinite, nostalgia plays a factor in the game’s popularity.

With less than two months until the official release of Halo Infinite, amusing clips like these will likely help create enthusiasm. These unscripted multiplayer encounters act as teasers for the game’s post-launch potential. If the single-player campaign can capture even a fraction of this enthusiasm, Halo Infinite will be a step in the right way for the franchise.

Halo Infinite will be published for Xbox One, Xbox Series X|S, and PC on December 8, 2021.

Hawkeye’s Age of Ultron MCU Skin Will Be Added to Marvel’s...