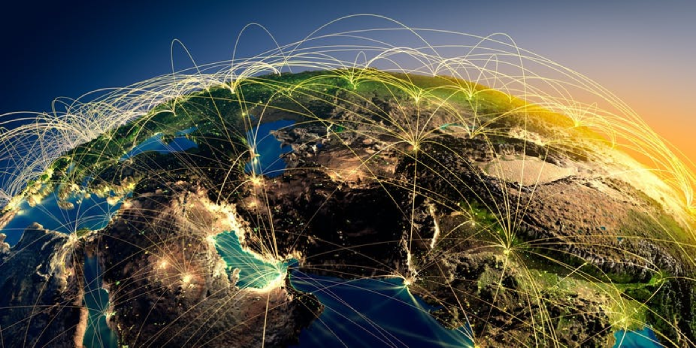 Here we can see, “How Does the Internet Work?”

What is the Internet?

We must first define what a “network” is before we can discuss the Internet. A network is a collection of connected computers that can communicate with one another. A computer network is similar to a social circle, a group of individuals who know each other, communicate information regularly, and coordinate activities.

Because computers are connected within networks, and these networks are all connected, one computer can communicate with another computer on a different network via the Internet. This allows for the quick interchange of data between computers all around the world.

Wires, cables, radio waves, and other networking infrastructure connect computers to one other and the Internet. All data received via the Internet is converted into light or electrical pulses, often known as “bits,” which the receiving computer subsequently interprets. These bits travel at the speed of light across wires, cables, and radio waves. The faster the Internet runs, the more bits can move through these lines and cables at once.’

What is distributed networking, and why is this concept important for the Internet?

The Internet does not have a command center. It’s a distributed networking system, which means it’s not reliant on any single machine. The Internet can be accessed by any computer or hardware that can send and receive data in the proper manner (e.g., via the proper networking protocols).

Because of its distributed nature, the Internet is extremely robust. In contrast to a computer, which may not function if a component is missing, computers, servers, and other networking hardware connect and disconnect from the Internet regularly without affecting how the Internet works. Even on a big scale, if a server, a data center, or a region of data centers goes down, the remainder of the Internet will continue to function (if more slowly).

How does the Internet work?

Packets and protocols are two key ideas that underpin how the Internet works.

A packet is a small portion of a bigger communication in networking. Each packet includes data as well as information about the contents. The “header” contains information about the packet’s contents and is placed at the front of the packet so that the receiving machine understands what to do with it. Consider how certain consumer devices come with assembly instructions to appreciate the function of a packet header.

Data is first broken down into smaller packets, converted into bits before being transferred over the Internet. Various networking devices, such as routers and switches, route the packets to their destinations. The receiving device reassembles the packets in order and then uses or displays the data once they arrive at their destination.

Compare this to the construction of the Statue of Liberty in the United States. The Statue of Liberty was planned and erected in France for the first time. However, because it was too huge to fit on a ship, it was sent to the US in pieces, with instructions on where each piece belonged. Workers who got the pieces put them back together to create the statue in New York today.

While the Statue of Liberty took a long time to build, transferring digital data in smaller chunks over the Internet is extraordinarily rapid. A photo of the Statue of Liberty hosted on a web server, for example, can travel around the world one packet at a time and load on a computer in milliseconds.

Packet switching is a technique for sending data via the Internet. Intermediary routers and switches can process packets independently of one another, regardless of their source or destination. This is done on purpose to ensure that no single link takes over the network. A link between two computers may take numerous cables, routers, and switches for minutes at a time if data was delivered between computers all at once with no packet switching. In essence, only two people would be able to utilize the Internet simultaneously, rather than the nearly infinite number of people who can do so now.

One of the key obstacles that the Internet’s developers had to overcome was connecting two machines that may utilize different hardware and run different software. It necessitates the use of communications mechanisms that are understood by all linked computers, much as two individuals from different parts of the world may require a common language to communicate with one another.

Standardized procedures are used to solve this issue. A protocol is a standardized means of performing specific operations and formatting data in networking so that two or more devices may interact and understand one another.

The Internet works regardless of who or what connects to it because all Internet-connected computers and other devices can interpret and understand these protocols.

Making the Internet function for everyone necessitates a wide range of technology and infrastructure. The following are some of the most important types:

How do these concepts relate to websites and applications users access over the Internet?

Take a look at this article. It was transferred across the Internet piece by piece in the form of thousands of data packets for you to see it. These packets were sent from our web server to your computer or device via cables, radio waves, routers, and switches. Your computer or smartphone received the packets and forwarded them to your device’s browser, which decoded the data in the packets to display the text you are currently reading.

The following are the steps involved in this procedure:

Pros of the Internet

On the Internet, you can find and learn about almost anything you can think of. There are millions upon millions of web pages dedicated to a wide range of subjects. This richness of information allows people to gain a deeper understanding of topics that they may not have previously considered or cared about.

Another fantastic by-product of the Internet has been communication. With a few mouse clicks, people can connect with others all around the world. As a result, many cultures around the world are now much more accepted and understood.

The business world has never been the same since the Internet’s commercialization. The capacity to reach a wide range of markets gather vital customer information, and conduct business in other regions of the country or world has resulted in a virtual commercial boom that no one could have predicted. Along with the commercial aspects of things, people may now seek and apply for employment entirely over the Internet, opening up the global job market to many people with great abilities to give.

Along with the Internet’s commercial and financial components, entertainment has been eternally altered. Any movie, song, game, book, or piece of software that you can think of is available on the Internet. It has changed the way we enjoy ourselves completely.

Dating and other social media sites have revolutionized the process of finding a life partner on the Internet. People are forming new relationships with people they may never have met otherwise, whether it’s friends or spouses. It broadens people’s perceptions of how easy it is to meet and mingle with new individuals.

Cons of the Internet

1. A Breeding Ground For Illegal Activity

One of the unintended consequences of the Internet has been the immense amount of illegal and dangerous activity that it has harbored and perpetuated. The ease of information has given insight into burglaries, terrorist attacks, kidnappings, and many other types of crimes. It also sparked a crime of a different sort, but on a monumental level. Piracy is defined as the downloading or distribution of materials such as movies or music without the owner’s permission. Because people do not see it as a serious problem, it is possibly the most commonly committed crime in today’s culture. Artists, software engineers, and production businesses, on the other hand, would vehemently disagree. Before the Internet, if you wanted to listen to the latest song or watch the latest movie, you had to pay for it; now, you can download it for free.

2. The World Is Becoming Dependent

The Internet does not store all of our personal information. This means that the security of our medical, criminal, educational, and financial records is entirely dependent on the sites where they are stored. Computer viruses are incredibly frequent, and they’re getting more aggressive all the time. They are transmitted via the Internet’s communication connection, and if one is poorly built, it might bring the economy to a halt.

Everything you look for or post on the Internet can be traced back to the person who owns it. While technology can deter crime, it is far more typically utilized to gather market data. If you search for “shoes,” you’ll notice adverts for shoe businesses on every website you visit, and you’ll even start receiving ads from shoe stores in the mail. Many private details, such as bank account numbers and social security numbers, are voluntarily shared on the Internet. Hackers can easily gain access to this data and use it to commit fraud or identity theft.

4. Children Are Vulnerable and Exposed

There is no method to accurately check age on the Internet, which is a major worry given the abundance of content that children should not view. The most common is pornographic material, and children can easily come upon these types of websites and be exposed to things they should not be. Children are at risk not only from unsuitable materials found online but also from the ease with which they can communicate with others. Every day, internet “friends” encourage children to meet them or do things for them that put them in grave danger.

Important Facts About The Internet

ARPAnet’s first message was sent on October 29, 1969, and it was a “node-to-node” communication from one computer to another. On January 1, 1983, ARPANET adopted TCP/IP, and researchers began to put together the “network of networks” that would eventually become the modern Internet.

No one runs the Internet. It’s set up as a network of networks with no centralized control. Thousands of businesses, universities, governments and other organizations run their networks and share traffic through voluntary interconnection agreements.

Without a court order, no statute provides the US authority over an ISP. A court ruling is also required for the government to shut off services. Human rights organizations such as the ACLU, Amnesty International, and others exist in addition to these pretty major hurdles.

ELI5:How does the internet work? Who "hosts" it and how does it work? (more questions inside) from explainlikeimfive

How the internet works… from funny