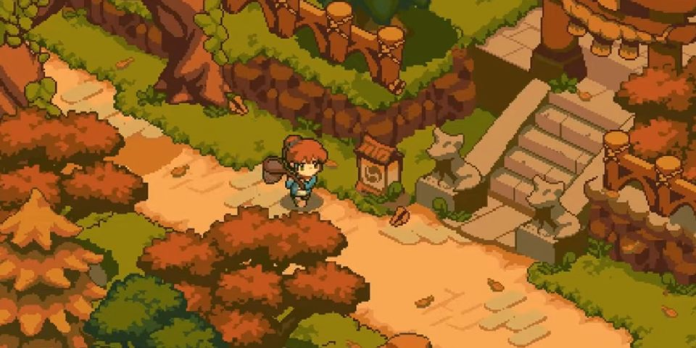 Yokai Inn’s graphics refresh was recently featured in a video that demonstrated the game’s new aesthetic style and some new gameplay.

In a new video, the upcoming Yokai Inn indie simulation game showcased its new graphics. Yokai Inn is a simulation game in a decrepit, abandoned inn that comes to life with spirits and creatures whenever the sun sets, similar to the Studio Ghibli film Spirited Away. It was officially unveiled during the June 2021 E3 Expo and described as a Ghibli-style Stardew Valley. The player is then given the option of repairing and running the inn by performing furnace maintenance, sweeping floors, farming, cooking, fishing, mining, and crafting. Players will engage with yokai patrons and other NPCs as they work to establish and expand their inn.

Although the game was officially revealed, there have been significant challenges with its development since then. Yokai Inn creator ShibaPixels pledged to update the art style of their game after fans confused it with another indie gaming project named Frontier Story. Both games feature a detailed pixel art aesthetic, and parallels have been made between the two graphics. ShibaPixels confessed that Frontier Project impacted the art style for Yokai Inn and apologised for the near-identical images.

According to a video released to Wholesome Games’ Youtube channel, Yokai Inn’s graphics have been refreshed. The new trailer for the game features the game’s new art style and some new gameplay. The main character is advised to bring a wonderful meal to the town’s summer festival by a fox spirit named Kazuya in the teaser. The rest of the teaser depicts how the character gathers ingredients for the meal, travels across town by train and deer, and interacts with new characters, including a yokai named Mai, who wants to attend the festival. The main character is seen with Mai during the summer festival, presenting Kazuya their buri daikon dish at the end of the trailer.

The new art style appears to be nearly indistinguishable from the old art style based on the graphics seen in the Yokai Inn teaser. The alterations are slight, with the main character becoming the most noticeable. Their eyes, clothes, and hairdo have all been changed to make them appear less like the protagonist from Frontier Story. Small changes to the NPC designs and the game’s colour palette, which appear to have changed significantly, are other modifications. Given that Yokai Inn has yet to be released, further adjustments may be made.

Regardless of the art style change, the featured gameplay in the trailer appears to be both enjoyable and enchanting. The chat with the game’s many NPCs appears to be particularly interesting. Hopefully, Yokai Inn will alleviate some of the annoyances that many gamers experience with NPC conversation in games like Animal Crossing: New Horizons. Fans of Japanese folklore and pixelated indie games should keep an eye on Yokai Inn’s progress in any case.

Battlefield 2042 delayed and the pandemic is to blame