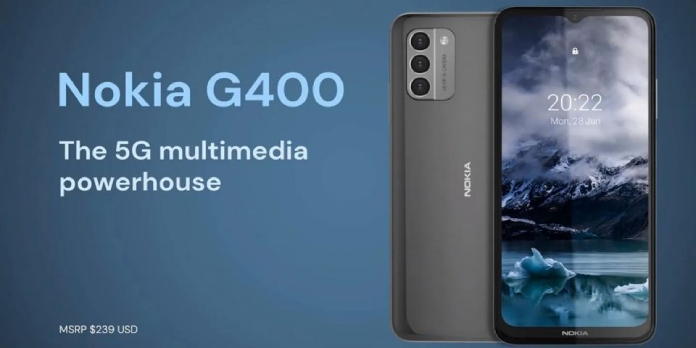 The Nokia G400 is one of HMD Global’s newest Android phones. It’s cheap, but it’s also the first Nokia phone to include a 120Hz refresh rate.

At CES 2022, Nokia introduced four new Nokia-branded Android smartphones, including the Nokia G400. However, Nokia Mobile maintains its habit of focusing on entry-level and mid-range smartphones and relaunching classics from the Nokia period as the new year begins. Even while many consumers demand a new flagship, the brand does not appear to be interested in producing one just yet.

Nokia Mobile phones are manufactured by HMD Global, a Finnish firm, under a licensing deal with Nokia. Other firms that create earphones, Bluetooth speakers, laptops, TVs, and Android TV streaming devices have been licensed to use the Nokia brand name. On the other hand, mobile phones continue to be of particular importance due to the brand’s previous supremacy.

The Nokia G400 5G smartphone is a little less expensive than the Nokia X100, which was released in November 2021 exclusively for T-Mobile. Although both phones have similar specifications and functions, their designs are vastly different. HMD Global has equipped the Nokia G400 with a display with a waterdrop notch that houses the front-facing camera. The Nokia 6400 has also ditched the cookie-shaped camera housing favouring a rectangular camera island, as seen in the photograph from Nokia Power User. The phone has three cameras on the back, and the lack of a visible fingerprint scanner indicates that it either lacks one or is buried beneath the power button on the side.

For a small price, you get a lot of features

While the specifications aren’t groundbreaking, there’s still a lot to be had for the money. The 120Hz refresh rate on the 6.6-inch display is a first for a Nokia-branded smartphone. The phone is powered by a Snapdragon 480 5G CPU with 6GB of RAM and 128GB of storage. A 48-megapixel sensor serves as the primary rear camera, complemented by a 5-megapixel ultra-wide angle camera and a 2-megapixel macro camera. Again, the specifications are unclear, but the Nokia G400 is expected to launch in the United States later this year, running Android 12 out of the box and costing $239.

Also See:  The Nokia X20 is the company's first model to have Android 12