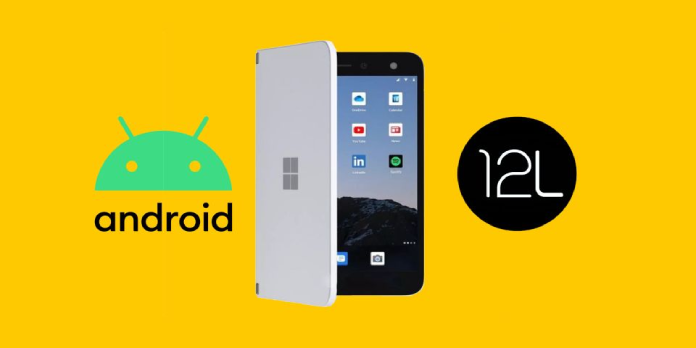 For a long time, the original Surface Duo has been stuck on Android 10, although sources say that Android 11 and Android 12L are on the road.

Microsoft appears to be planning to update its original Surface Duo smartphone to Android 12L to give it new life. The $1,400 device was released in September 2020 by the Redmond-based company, exhibiting a fresh approach to foldable tablets. While reviews praised the smartphone’s well-crafted appearance and amazing hinge, it featured a mediocre CPU and was plagued by software issues. When you add that Android 11 was released the same month, it appeared that the Surface Duo was doomed from the start.

Despite the setback, Microsoft has remained committed to the Surface Duo. It has promised three years of Android updates and regular security patches. Indeed, the business indicated that it would work to bring Android 11 to the twin-screen handset by the end of 2021, fixing its out-of-date software. Unfortunately for users, the year (and another Android generation) passed without the refresh being released. It’s not like Microsoft hasn’t tried to deal with the software before; the Surface Duo 2, which runs Android 11, was released last fall.

Hope may be on the horizon for those irritated by Microsoft’s seeming disregard for the original Surface Duo. According to Windows Central‘s sources, the company is nearly finished with its Android 11 update, which might be released in the next weeks. According to the source, the update would not only bring the gadget closer to the newer Surface Duo 2, but it will also cure many of the flaws that have plagued it since its launch.

The Android 12L is rumored to be on the way.

While Android 11 is expected to give the Surface Duo a fighting chance in the foldable world, Android 12L may be the most interesting version yet. According to Windows Central, Microsoft intends to skip Android 12 and instead work on an Android 12L release. If this is right, the move makes sense because the software is designed to operate better with foldable.

The prospect of not one but two big improvements is certainly enticing to the original Surface Duo fans. Of course, Android 12L is still very much a work-in-progress, and no one knows when it will be ready for prime time. Considering the extremely long wait for Android 11, it’s easy to see why Microsoft Surface Duo consumers could prefer a Samsung Galaxy Z Fold 3 or perhaps the anticipated Google Pixel foldable.