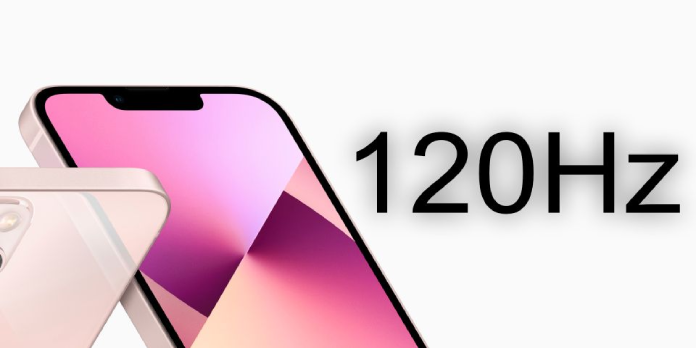 The iPhone 14 is the subject of numerous rumors. One of the most recent ones implies that the base models would significantly increase display and RAM this year.

According to a new iPhone 14 rumor, Apple will offer 120Hz displays to all models this year, which were previously only available on the iPhone 13 Pro variations. The 120Hz ProMotion display is one of Apple’s most visible improvements to the iPhone 13. It more than doubles older models’ standard 60Hz refresh rate, making all phone interactions appear significantly smoother. Going from 60 to 120Hz improves everything, whether surfing through Twitter or archiving emails.

There’s only one issue. Last year, only the iPhone 13 Pro and iPhone 13 Pro Max received the 120Hz improvement. The 60Hz refresh rate is still used by the standard iPhone 13 and iPhone 13 mini. Although 60Hz isn’t unusable these days, since most Android devices — even those under $300 — have 90 or 120Hz displays, being stuck with 60Hz on the iPhone 13 is a nuisance. However, if one new report is believed, that might alter in 2022.

According to Apple analyst Jeff Pu, all models of the iPhone 14 will have a 120Hz display this year (per a research note seen by MacRumors). Since the iPhone 13 series launched, this has been rumored, but this is the most trustworthy confirmation yet. As a result, the iPhone 14, iPhone 14 Max (the device that will replace the small), iPhone 14 Pro, and iPhone 14 Pro Max will all have 120Hz refresh rates. If this is the case, it will be fascinating to see what type of 120Hz display Apple utilizes. The LTPO displays on the iPhone 13 Pro and 13 Pro Max allow them to scale between 120Hz and 11Hz, depending on their performance. The 14 Pro and 14 Pro Max are nearly guaranteed to include LTPO, but it’s unknown if the non-Pro iPhone 14 devices will have the same technology.

The iPhone 14 could also get a significant RAM boost

However, 120Hz isn’t the only improvement coming to the entry-level iPhones. According to MacRumors, all iPhone 14 versions will come with 6GB of RAM. That’s the same amount as the iPhone 13 Pro and 13 Pro Max, but it’s a significant boost over the iPhone 13 and 13 mini’s 4GB. Although an increase in RAM is unlikely to be a game-changer in everyday use, anything that improves multitasking is always nice.

Aside from those two points, the article validates rumors from other sources, such as the iPhone 14 Pro and Pro Max’s 48MP primary camera and new baseline storage of 256GB. When you add it all up, the iPhone is shaping into a really exciting year (especially for those who can’t afford the Pro models). However, the iPhone 14 isn’t likely to be announced until September. So expect plenty more rumors and leaks to fill the media in the months leading up to that.