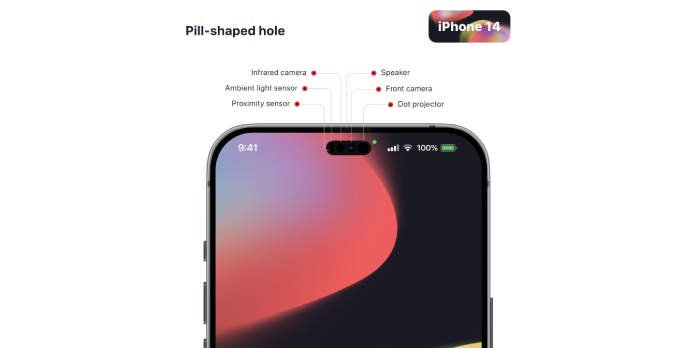 According to one of the most recent iPhone 14 rumors, the device would include a pill-shaped notch/camera cutout. This mockup depicts how that design change might seem.

The notch is now a standard feature of the iPhone — and a necessary location for the device’s front-facing camera and Face ID technology. With the iPhone 13 series, Apple lowered the size of the notch for the first time, and in 2022, it may be prepared to do away with it totally for something new. The iPhone 14 appears to be the first iPhone featuring a hole-punch cutout for the selfie camera (similar to what many Android phones have had for years). The Face ID sensors will be located beneath the display, while the actual camera will be located on top of it, with a little notch at the top.

This cutout was once thought to be a small circle, similar to the camera cutouts on the Pixel 6, Galaxy S21, and other smartphones. However, reports say that this cutout will be in the shape of a pill rather than a circle. Developer Jeff Grossman made a mockup of this idea to assist folks in imagining what it would look like in practice. Grossman took a screenshot of his iPhone home screen, turned it upside down, and replaced the notch with a pill-shaped cutout. Grossman builds a rather realistic approximation of what a pill-touting iPhone could look like by gazing at the screenshot with his iPhone held upside down.

Is This Better Than The iPhone Notch As It Is Now?

When you see the pill cut out like this, it instantly makes you wonder if it’s better than the notch we have now. That’s a question to which everyone will most likely respond differently. The pill cutout is better than a full notch in terms of display space. It’s not enough to make a significant difference in everyday use. Still, it could free up enough room for Apple to add additional icons to the status bar (like a battery percentage, perhaps). It also offers the iPhone a completely different look than we’ve come to expect from Apple in recent years. Apple likes it when consumers can differentiate a new iPhone from an old one right away, and a design update like this would do just that.

However, following years of Android phones with smaller circular cutouts, the pill-shape may take some getting used to. If Apple’s first attempt at a camera cutout is twice as large as competing smartphones, competitors will have even more ammunition to mock the firm (and rightfully so).

If you despise the way this appears, the good news is that none of it is true. While the iPhone 14 is likely to ditch the notch in favor of a camera cutout, the pill shape displayed below is still only a rumor. Regardless, it’s an intriguing design update that Apple appears to be considering. After a few years of the famous notch, the pillage may be approaching.