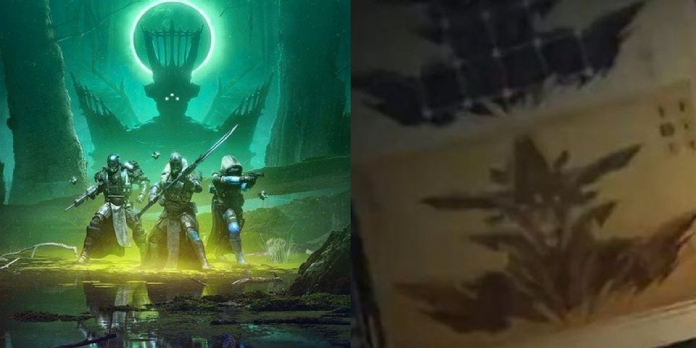 A trailer for the upcoming Destiny 2: The Witch Queen expansion has accidentally used fanart of Xivu Arath rather than official Bungie materials. The new trailer, which debuted earlier in the week, takes a glance at the search for Destiny’s Savathûn, exploring a detective’s board of clues, images, and notes. The Witch Queen is Destiny 2’s next expansion and is about to release in February 2022.

Artist and Twitter user Mal E’s fanart of Xivu Arath was quickly spotted within the latest Witch Queen trailer, with Forbes confirming with the artist that Bungie hadn’t sought permission to use the piece. Mal E told the publication they believed the utilization of the artwork was “100% some quite crazy mistake,” noting that they are “absolutely not claiming any theft of design.” Bungie lead community manager Cozmo described things as a “mix-up,” confirming that Bungie has now sought permission from the artist and can be crediting them. He said:

“There was a mix-up when creating this post and @relay314’s art was accidentally used. we’ve reached bent them and got permission to use their work and are now crediting them for this awesome community depiction of Xivu Arath.”

There was a mix-up when creating this post and @relay314's art was accidentally used. We have reached out to them and got permission to use their work and are now crediting them for this awesome community depiction of Xivu Arath. https://t.co/0m0GRsJbnt

Also See:  How To Turn Off Read Receipts On Mac In Three Easy Steps!

Destiny 2: The Witch Queen is simply the start of a replacement chapter for fans of the game, beginning several latest content. The expansion will be seminal to the subsequent few seasons of Destiny, with season 16 beginning on the day of The Witch Queen expansion’s release. Following that, season 17 will introduce a replacement map and all-new environments.