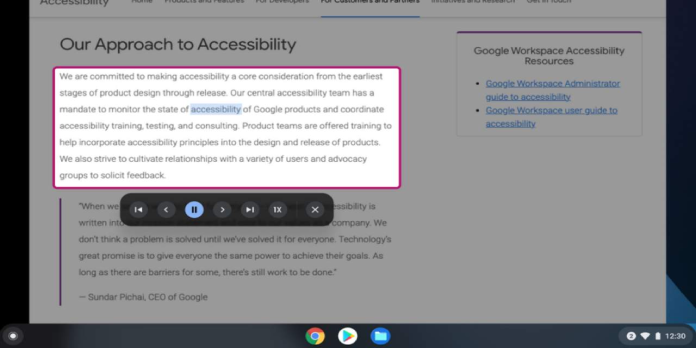 Unsurprisingly, most of today’s consumer tech products are designed for people who do not have physical or mental disabilities. That isn’t to say that these are the only people who deserve to have so much power at their disposal. They should be the ones whose lives are improved even more by modern devices and software, which correct and augment what would otherwise be major roadblocks to living a functional and productive life. Google is demonstrating some features that make its Chrome OS platform more accessible to people with disabilities. Chromebooks are frequently portrayed as devices designed specifically for those purposes.

Sight is the most common disability that affects people’s ability to use and enjoy personal computing devices like smartphones and laptops. Complete blindness, low vision, dyslexia, and even those learning a language unfamiliar to their eyes are all examples. Text-to-speech is the most common solution in this area, and Chromebooks take it a step further with Select-to-speak.

This feature is part of Chrome OS’s built-in screen reader, but it has the added benefit of only speaking out the text you’ve selected. The voice that speaks those words will sound more natural with this month’s update, complete with the various accents found in the 25 languages currently supported. Even for those with dyslexia, Google claims it makes it easier to follow along and comprehend text.

This comes after a previous update to the same text-to-speech system, which gave users more control over how the words were spoken aloud. They can, for example, accelerate or decelerate the speech. They can even pick out specific words that are being spoken, which will be visually highlighted by darkening the rest of the text.

Google is also using this opportunity to highlight the other accessibility features that Chrome OS includes. There’s everything from a standard screen magnifier to a built-in ChromeVox screen reader. Point Scanning is available on Chromebooks for those with a Switch Access device connected via USB or Bluetooth.