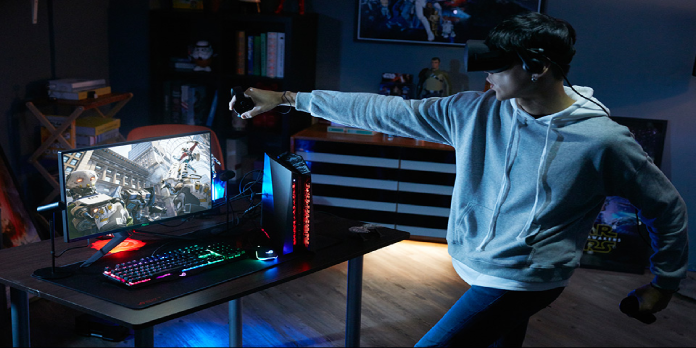 Here we can see, “How to Check if Your Pc Is Ready for Virtual Reality”

With virtual reality headsets like the HTC Vive and Oculus Rift available on the market, consumer interest in VR is on the rise. Of course, like your friends who have already joined the trend, you would also like to play the well-liked Oculus Rift game Chronos or use the HTC Vive to experience Fallout 4’s post-apocalyptic universe. However, one point must be addressed before you decide to join the fray and buy any of these headsets: Is your PC prepared for virtual reality?

System requirements for virtual reality use are higher than for conventional gaming. For example, VR headsets require a resolution of 25601200 in 3D and a frame rate of 90 FPS, in contrast to the standard 1080p computer display. However, there are methods for determining whether a PC can fulfill these requirements.

The suggested system prerequisites for Oculus Rift are as follows:

Through the Oculus Rift Compatibility Tool, Oculus also provides a quick and easy way to determine whether your machine is VR-ready. The program checks the motherboard’s GPU, CPU, RAM, number of USB ports, and USB controller. If your PC fails the test, the compatibility checker will also recommend what you should do.

After installing the software, click the.exe file and then select Start in the pop-up box. The tool will show the outcomes in a matter of seconds. Although Oculus lowered the system requirements for PC users in October, this information will assist people in deciding whether to acquire the VR headset or upgrade their PC first.

Additionally, confirm that your computer uses a GTX 970 or 980 graphics card, not a 970M or 980M as is the case with laptops. Virtual reality experiences might not be possible on laptops with GTX 970M or GTX 980M graphics cards.

To determine whether a user’s computer can support VR, Valve also offers a benchmarking tool: You can get Valve’s SteamVR benchmarking program from Steam. A benchmark that assesses how well your computer renders VR material at 90 FPS at the suggested graphics requirements determines whether your PC satisfies the system requirements for the HTC Vive.

1. What makes a computer Oculus-ready, and how do I know?

Download and run the Oculus Rift Compatibility Tool to see if your PC is ready for the Oculus Rift. The application will examine your PC’s hardware to ensure it has enough RAM, a graphics processor, a CPU, and USB ports to support the hardware.

2. What type of PC should I use for virtual reality?

You frequently need to operate with a wire to utilize a VR headset with a computer. Additionally, a gaming computer must have at least one NVIDIA GeForce GTX 1060 visual card or an equivalent card. The PC must also have enough USB ports, an Intel Core i5 processor, and at least 8GB of RAM.

3. Can I use virtual reality on my PC?

Also See:  Windows 11 Freezing on Startup? Here’s How to Fix It

How do you know if a PC is ‘VR Ready’? from oculus

Confused if my pc is VR ready? from oculus