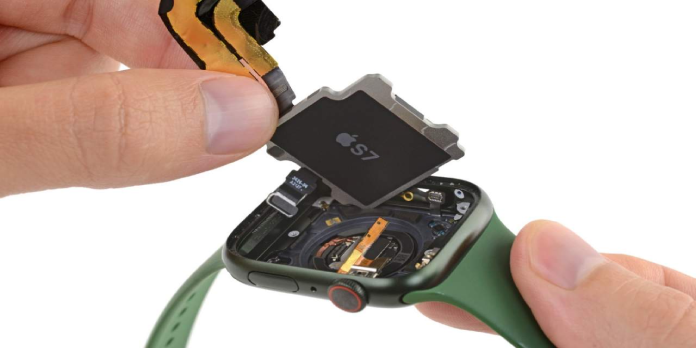 With the assistance of three former Apple engineers, the iFixit team has published their comprehensive disassembly of the Apple Watch Series 7, exposing both significant and tiny modifications. The deconstruction team reveals that the Apple Watch Series 7 has “secrets that only a trained eye can spot,” including many minor adjustments that are “important” to the overall hardware update.

The Apple Watch Series 7 was unveiled last month, and Apple said in early October that the model would be available for purchase on October 15. The announcement came after various reports of sources said that Apple encountered delays with the next wearable model due to production issues connected to hardware modifications.

The breakdown delves into several components that may have contributed to these issues, such as the new OLED display with only one flex cable, indicating the use of on-cell touch technology. The iFixit team behind this deconstruction believes that the redesigned display caused manufacturing challenges, resulting in the Apple Watch Series 7 being released without a firm release date.

During the deconstruction, getting into the watch with heat, a suction cup, and a pick wasn’t too harsh, albeit the operation requires a cautious touch to avoid injuring any fragile components. Aside from the new display, the deconstruction reveals a new battery with larger dimensions than the previous model and minor increases in energy density and capacity.

Overall, the iFixit team assigns a repairability score of 6 out of 10 to the Apple Watch Series 7 wearable, provided you’re not scared to risk diving into the hardware yourself.