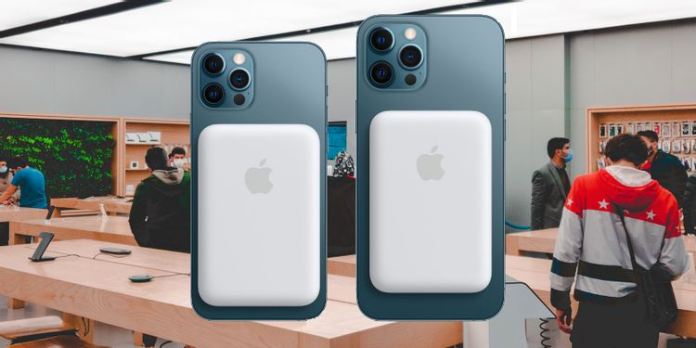 Apple makes it easy to charge your iPhone 12 using the MagSafe battery pack, which costs $99.

Apple just released the MagSafe Battery Pack. The MagSafe technology from Apple allows this accessory to attach magnetically to compatible devices to charge them wirelessly.

Apple’s MagSafe battery pack can only charge iPhones at 5W. This is similar to other wireless chargers. It may take some time. The Battery Pack can still be charged at 15W if you plug it into it.

You can check the MagSafe Battery Pack’s battery level by using the Battery widget. You will see the accessory’s battery status in the widget along with your iPhone’s current battery level and any other paired accessories.

You will need iOS 14.7 or higher to use the accessory. Unfortunately, iOS 14.7 was just released, so you will need to update your iPhone while waiting for your Battery Pack.

What Devices Are Compatible With the MagSafe Battery Pack?

Although previous iPhones supported wireless charging, MagSafe is not available on any of these models. To secure the Battery Pack to your iPhone, you will need MagSafe magnets. The accessory could easily slip off without them. Future iPhones will also have MagSafe.

The MagSafe Battery Pack can be used with any MagSafe accessory. However, some users reported that cases could weaken the magnetic strength and cause accessories to fall off more easily.

MagSafe was created for accessories like the Battery Pack. MagSafe is an iPhone feature that allows you to attach and charge your device quickly.

Apple has already made charging wirelessly easier with MagSafe, but now it wants to make charging even simpler on the move.