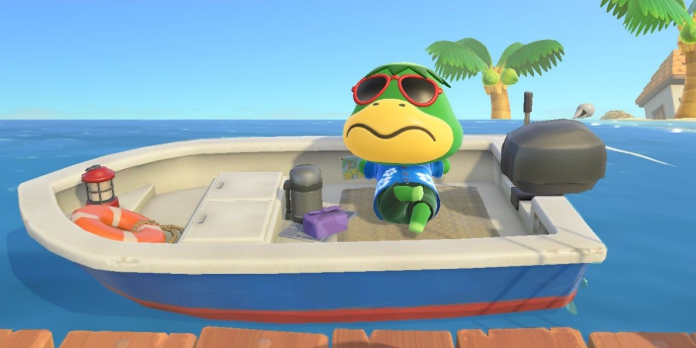 An Animal Crossing New Horizons player-created Kapp’n a whole port, replete with a fountain and marketplace, to help him cope with his loneliness.

To ensure Kapp’n never feels lonely, an Animal Crossing New Horizons fan created a port near a pier. Kapp’n, a turtle drawn to life on the water, has been a staple in the Animal Crossing franchise since the first instalment in 2001. However, the character didn’t enter the ACNH roster until Update 2.0, which was released late last year on Nintendo Switch.

This beloved NPC joined a few other fan-favourite characters on the New Horizons island, including Harriet, Tortimer, and Brewster, the latter of whom also brought The Roost café along for the voyage. Kapp’n, like many other residents, plays an important role in the island’s day-to-day operations. For example, the character’s status as a sailor enables him to transport players to mysterious islands via Kapp’n’s Boat Tours, which costs 1,000 Nook Miles per journey. And if Kapp’n ever gets lonely while waiting for the ACNH Boat Tours business to take up, one player has devised a method to ensure the turtle is never alone.

Reddit user penguin army released footage of their latest Animal Crossing New Horizons creation today, January 12. Rather than developing something for themselves, the player spent time building a port for Kapp’n near the docks. It’s a big space with a fountain, a marketplace, and a beach area on the far left with a stage. The Penguin army stated that the build was an attempt to ensure that Kapp’n never feels lonely, and it appears that they succeeded in that goal and more. The following is a link to a video clip:

The player even went so far as to embellish the area with castle walls and a beached boat, which are nice details that help sell the port-like vibe.

Nintendo has virtually discontinued Animal Crossing New Horizons support, except for minor patches and tweaks. Happy Home Paradise is the game’s first and only paid DLC, whereas Update 2.0 is the game’s final major update. Fans are naturally hoping that this means a sequel is on the way; however Nintendo has yet to hint at such a project. However, the game’s phenomenal commercial success suggests that a real sequel will be released.

The Fortnite Chapter 3 Loading Screen Has Leaked, Indicating That Chapter...