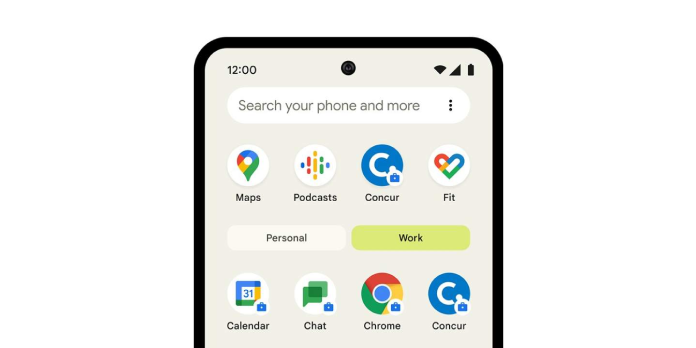 Google unveiled intentions to broaden Work Profile availability as part of a more significant update to Android for commercial users. The function allows users to segregate their business and personal lives on a single handset. However, it is only available on managed devices. Next year, that will begin to change when Google introduces the capability to Workspace users, with more to come.

With many people migrating to remote work, maintaining a work-life balance is more crucial than ever. Although many people have a separate work computer from their personal computer, mobile phones are less prevalent. As a result, business apps and accounts are frequently mixed in with personal stuff, making it more challenging to avoid work after hours and increasing security threats.

Work Profile on Android provides a solution by separating one’s work and personal stuff and adding a little briefcase symbol to work apps. This means that users with a Work Profile, for example, will have two instances of Gmail on their device, one for work and one for personal email.

The feature is only available on Android devices managed by EMM software. Google stated in its update that Work Profile will be available to Workspace users in 2022, although it did not specify a specific release date.

This will enable Workspace users to use the feature on unmanaged devices. Google says it plans to expand Work Profile availability to Android devices with additional identity providers, but no further details were provided. Google will undoubtedly return with additional details in the future, such as which versions of Android will support Work Profile.