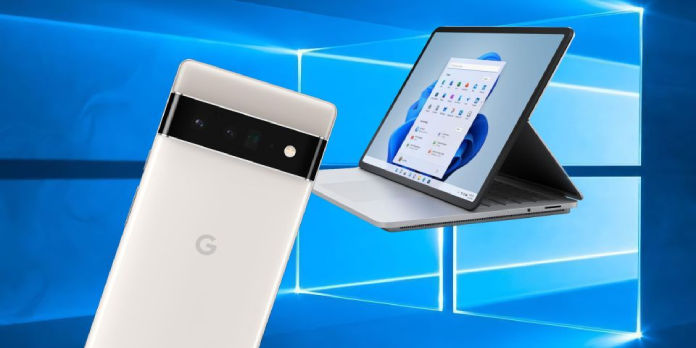 According to a few online debates, sending Android photographs and data to Windows could become faster and accessible if Nearby Share capability is added.

Android users may soon be able to exchange files and photographs with Windows desktops via Nearby Share, a once-in-a-lifetime opportunity. Anyone familiar with Android’s relatively new Nearby Share feature knows that it is a quick and painless wireless transfer system. Third-party apps have sought to fill the void, however their compatibility is sometimes limited. Something akin to Apple’s AirDrop, built by operating system engineers, is required.

For many years, Android has included some type of wireless file transfer. After placing two Android phones back to back, the original version, Android Beam, could communicate data between them. Beam has been the only built-in method for Android wireless transfers since 2011. It worked fine for tiny data bits like contact information, but it was too slow for huge files or films. Google unveiled Nearby Share in August 2020, a lightning-fast and simple-to-use solution that eliminated numerous issues when sharing with other Android devices. In June 2021, this capability was extended to Chromebooks. However, downloading images and other data to Windows and Mac computers and exchanging information with an iPhone user remains a challenge.

Mishaal Rahman, the senior tech editor of The Android Edge newsletter, recently tweeted that Android’s Nearby Share wireless file transfer function may be coming to Windows soon, calling it an “open secret.” The article includes photos of talks on the popular developer forum StackOverflow and a Reddit thread, discussing the mechanics of Nearby Share and the company’s future ambitions. A user named Xylthe mentioned a Windows version that was allegedly in development as part of a long-term plan in both places. Xylthe stated that he is the head of Google’s Nearby Share and Nearby Connections, which should be accurate. edwinwugoog‘s iOS code is also available on GitHub, while grishkaa‘s macOS program was created via reverse engineering Nearby Share, as mentioned on Reddit.

I can't wait for Google to update Nearby Share with support for transferring files to and from Windows PCs. Right now, it only supports Android <–> Android or Android <–> Chrome OS.

(The existing Nearby Sharing feature in Windows is not related to Google's Nearby Share.) pic.twitter.com/aQdoUjlGni

Share to IPhone, iPad, and Mac from a nearby location

edwinwugoog’s 20% project as a Google developer was to convert the Nearby Share functionality to the iPhone, however it isn’t being pursued as an app. The basic code for pinging a signal between an iPhone and an Android phone, on the other hand, is available on GitHub. Furthermore, because the iPhone and iPad operating systems are so similar, the same code would likely operate on both devices, allowing for the much-desired cross-platform file sharing.

Another developer, grishkaa, claims to have a prototype program that can interact via Nearby Share and works with a Mac. Xylthe volunteered to help and appeared genuinely interested in seeing this effort succeed. So far, no additional information has surfaced, and it does not appear to be a priority, similar to the iPhone version. Because Windows is a regular pairing with Android phones, the most likely operating system to gain compatibility with Android’s Nearby Share will be Windows. Support for Mac, iPhone, and iPad is expected to arrive shortly. The world isn’t divided into Apple fans and non-Apple fans. Apple is unlikely to make AirDrop compatible with more devices. On the other hand, Google may introduce Android’s Nearby Share to other platforms.