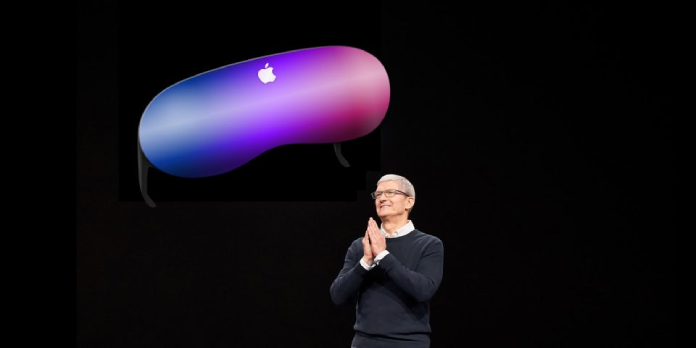 Apple’s AR/VR headgear includes three panels, with the third being a lower-resolution screen to fill the edge view.

Suppose rumours and leaks are to be believed. In that case, Apple will unveil its first AR/VR headset this year, and the latest information comes from a reputable supply chain expert who specializes in display technology. Quality is crucial because any headset’s screen is just about an inch away from the user’s eyes. Therefore, it might be one of the most important features in Apple’s anticipated VR device.

Apple has a long history of developing augmented reality. It purchased Metaio in 2015 and utilized its software development kit as the foundation for ARKit, which powers the iPhone and iPad’s AR Quick Look viewer. When questioned about Apple’s plans, CEO Tim Cook always says that no details about future devices will be divulged, but he almost always adds that he’s excited about augmented reality. This may be interpreted as a clear indication that Apple has much broader aspirations for the technology than the moderately amusing 3D items on the iPhone‘s screen.

Apple’s augmented reality/virtual reality headset is projected to come by the end of 2022, and it could be introduced at the Worldwide Developers Conference in June. While this device has been reported to arrive sooner, Apple’s ambitions may drive them to start sooner. According to display supply chain expert Ross Young, the gears may already be in motion on this device, with Sony rumoured to have been picked as the supplier of the headsets’ micro-OLED displays. Young’s tweet includes a link to a PDF document with the information, and it mentions Sony’s recent announcement of a 4,000-pixel-per-inch display with 4K resolution screens for VR. This could have been the first glimpse of some of the technology used in Apple’s headset.

Download our free white paper covering 10 predictions for the display industry in 2022…https://t.co/rZ2jrKd06J

Apple’s AR/VR headset, according to supply chain researcher Ross Found, would have three display modules. Sony’s extremely high-resolution micro-OLED panels, which are built exclusively for usage in VR, are reported to be two of them. The third panel is said to be a lower-resolution AMOLED display, which begs why Apple would incorporate three screens in the first place, considering that humans only have two eyes.

Apple isn’t developing for a fictional ‘triclops,’ as it turns out. Instead, young proposes that the third display be used to broaden the view while keeping costs down by wrapping around the edges of the two 4K screens. Because the eye has a much larger focus and is better equipped to detect details in the centre of the picture, a reduced resolution at the edges may go unnoticed. Despite this cost-cutting strategy, Apple’s initial AR/VR headset is expected to be a high-end device with prices aimed at professionals and developers interested in getting a head start on generating AR and VR content for Apple’s ecosystem.