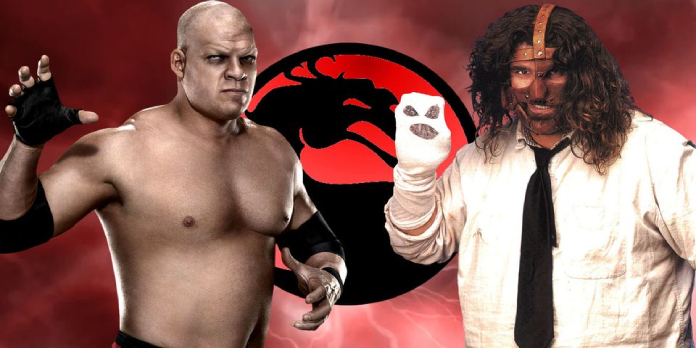 A WWE fan wishes for ring icons Mick Foley and Kane to appear as guest combatants in Mortal Kombat 12. NetherRealm Studios has revealed that a new iteration of their flagship fighting game genre is in the works, with recent leaks indicating that MK12 is taking precedence over other highly-anticipated projects like Injustice 3 and a suspected Marvel title.

The Mortal Kombat community has already begun to speculate about the Mortal Kombat 12 roster’s characters, especially after the Mortal Kombat 11: Aftermath DLC addition shook up the series’ regularity of multimedia crossovers. The broad assortment of DLC guest characters from films, comics, and other video games shown in past entries is a popular tradition that many hope will continue in MK12. MK11 succeeded in this area, with post-launch material containing surprise visits by the Joker, Spawn, Rambo, Terminator, and Robocop.

Now, one Mortal Kombat 12 fan is pleading with NetherRealm to look into the realm of sports for two Mortal Kombat 12 guest characters. User Sea Farm8520 begs that veteran WWE superstar Mick Foley, and Kane be included as guest DLC combatants on Reddit’s Mortal Kombat community. Some readers think the idea is intriguing, while others doubt it will happen due to the WWE’s current emphasis on preserving a family-friendly image – which contrasts sharply with the mid-90s era of wrestling for which Kane and Foley were best known. Despite this, a few commentators predict that NetherRealm would be more likely to incorporate any wrestlers as variant skins for existing MK12 characters rather than designing new models and moves for each, with John Cena as Johnny Cage The Rock as Geras among the possibilities.

While no WWE wrestlers have appeared in any Mortal Kombat or Injustice games to date, in 2015, NetherRealm released WWE Immortals, a short-lived WWE-themed fighting game for mobile. It was shut down in 2019 after featuring high-fantasy reimaginings of top WWE superstars. On the other hand, WWE is set to return to gaming after a nearly two-year break with WWE 2K22, a wrestling game that promises to put the company back on track after the disastrous launch of WWE 2K20. Visual Concepts just released a new WWE 2K22 trailer with revised character models, which may theoretically serve as the foundation for WWE stars in MK12.

While WWE wrestlers do not attempt to kill their opponents in the same way Mortal Kombat characters do, both properties feature bizarre characters engaging in physical battle – occasionally with weapons. Kane’s fictional past, which includes familial treachery and supernatural abilities, isn’t too unlike Mortal Kombat characters Scorpion and Sub Zero, while Mick Foley’s Mankind and Cactus Jack alter egos are known for being very chaotic and brutal. Still, both of these fighters would be unusual selections for Mortal Kombat 12’s guest characters. Still, NetherRealm has a history of surprising us with who shows up in its legendary fighting game franchise.

How to Get Xbox Game Pass Ultimate for Just 1$