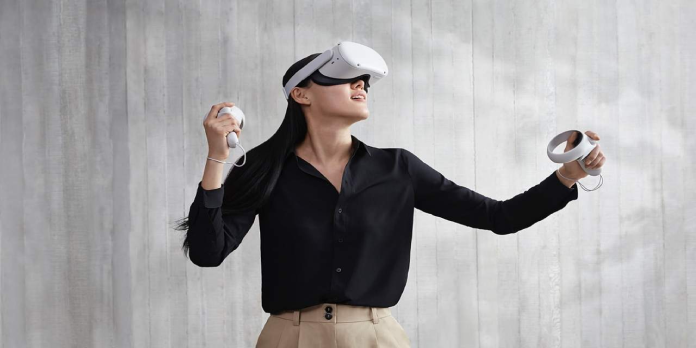 The Meta Quest – formerly known as the Oculus Quest – is getting its final software upgrade in 2021, and it looks like it’ll be a hefty one. There isn’t much in this update that has to do with virtual reality games, which plays into the “metaverse” idea behind Facebook’s name change to Meta. Instead, a large portion of it is devoted to mixed reality and usability, with several significant innovations on the way.

Messenger VR calling and a mixed reality camera for smartphones

Launching a new feature dubbed mobile mixed reality camera is arguably the most significant new addition in Quest’s version 35 update. You can use this function to show friends what a VR game is like by casting mixed reality to a smartphone — especially an iPhone. Yes, the mobile mixed reality camera appears to be restricted to iOS for the time being, as it requires an iPhone XS or newer running iOS 11 or higher. It also requires the Oculus app’s version 139 update, which has yet to be released. Thus it appears that this functionality isn’t available just yet.

You’ll be able to cast visuals of your VR gameplay to a phone once it’s online. This differs from Quest’s Live Overlay function, and it shows players in-game using the phone’s cameras rather than superimposing user video over footage collected through the headset. A dozen titles will support the mobile mixed reality camera when it becomes available, including Beat Saber and Superhot VR.

VR calling for Messenger joins the mixed reality camera as a prominent feature. This is one of the features Meta unveiled at Connect in October when it stated that it would no longer use the Facebook name internally. Messenger VR call does exactly what it says on the tin: it lets you make voice calls through Messenger while wearing your headset.

Multi-User Support and App Sharing aren’t new features, but they’re finally available with Quest’s version 35 upgrade. This implies Meta is confident enough in these capabilities to remove the experimental label, but nothing will change for individuals who are already using them. Multi-User support and App Sharing are now managed through the Accounts page in the Settings menu, according to Meta, so Quest users should be aware of this change.

Furthermore, Meta is introducing Cloud Backup for game saves. This feature was announced during Connect, but it’s now ready for prime time, just like Messenger VR calling. Your game saves will now be automatically backed up to Meta’s cloud, allowing you to pick up where you left off in your games if your headset is lost or stolen. According to Meta, cloud saves will be released slower than the version 35 upgrade, so you may not notice the feature even after installing it.

While cloud saves are enabled by default for all games, developers can choose to disable the feature. Although Meta doesn’t believe many developers are opting out, you can visit the Oculus website for a complete list of titles that enable cloud backups.

Improvements to the Horizon Workroom and the Public Test Channel

Meta announced today that Horizon Workroom customization features would begin rolling out in the coming weeks, following up on a Connect statement. So, if you’re wary of using Horizon Workrooms for the same virtual meeting area, you’ll soon be able to switch things around. Users will first choose from various virtual conference spaces, which can then be further customized with their company’s logo and posters.

Meta plans to offer a higher level of customization for Horizon Workrooms in the future but doesn’t specify what such customizations will involve. We don’t know when those more advanced customization options will be available, but we’ll keep you updated when Meta provides more information.

The company will also make more apps available as 2D panels for virtual reality in the following weeks. MURAL, Miro, and monday.com are among the apps Meta verified today, but more services will be added as time goes on. Finally, Meta has announced establishing a Public Test Channel, which will allow Quest users to try out software changes before they go live. You can sign up for the Public Test Channel on the Quest support site, but you won’t be able to revert to older software versions once you’ve done a Public Test Channel upgrade.

The Quest version 35 update is being phased out, which means that not everyone will get it straight away. The update is starting to roll out today, so keep an eye out for it in the following days and weeks if you’re a Quest user.

How To Set Up Face ID On iPhone, The Easy Way!