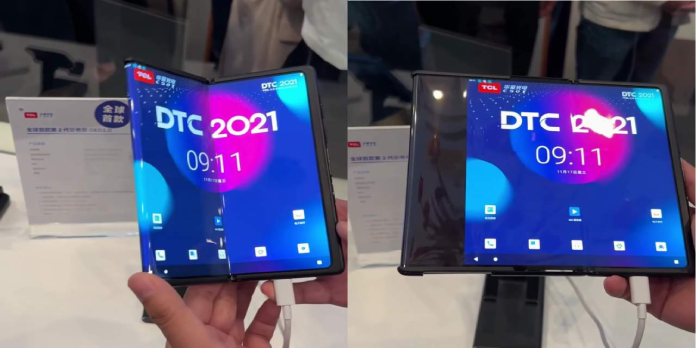 Foldable phones, at least those that resemble a book, are intended to address the issue of size. These are phones designed to fit in your pocket while also providing a larger screen when necessary. Even with today’s most capable foldable smartphones, we’re still a long way from the ideal, and no consumer-friendly rollable replacement has yet to emerge. Ever the display visionary, TCL came up with a solution that uses both styles to solve the size conundrum, and it’s showing off a functional prototype that will leave you both amazed and frightened.

TCL appears to enjoy demonstrating its screen manufacturing ability with rollable panels. It was already demonstrating working screens that could unfurl like a scroll to reveal more content as early as 2020. There hasn’t been a device like this in almost a year, with LG’s dormant Rollable being the only attempt to market the technology.

Also See:  How to: Retrieve Deleted Phone Numbers on Android

TCL took another crack at the problem earlier this year with a pretty unusual answer. Rather than choosing between folding and rollable screens, why not combine the two to make the ideal all-in-one device? After all, one of the issues with today’s foldable phones is that they can’t go any bigger than a nearly square tablet without making the folded phone form too big to use as a phone. If you have any doubts, look at the Microsoft Surface Duo.

TCL’s “Fold ‘n Roll” concept included a rooted phone that folded outwards, similar to the Huawei Mate X. When it’s fully opened, though, it slips out to one side, creating a more typical tablet form factor that’s broader than the Samsung Galaxy Z Fold 3 or even the Huawei Mate X2. On the one hand, this solves the size issue, but it also presents a slew of additional issues.

TCL, at the very least, believes in that goal, as evidenced by the fact that it attempted to build a functional prototype, as shown above. The prototype, dubbed “Fold & Slide” by the source, converts from a regular phone to a 10-inch tablet, much as many futurists said mobile devices will. That panel features a high resolution of 5120 x 1440 and can even reach 240Hz peak refresh rates.

Also See:  Every Twitch Chat Command You Should Be Aware Of

However, this perfect design creates serious issues, such as the wear and tear placed on a screen that folds and rolls. It also appears to necessitate an “outie” fold, in which the flexible screen is always exposed on the outside, regardless of whether the screen is folded or unfolded. Huawei, the most vocal proponent of the concept, has given up on it for the time being, and it may be a long time before we see a flexible display capable of doing so.