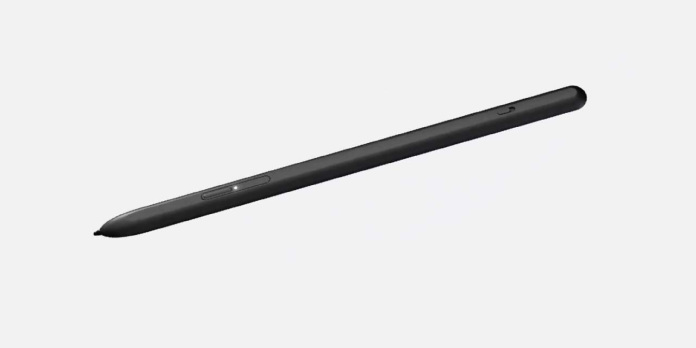 Samsung clearly has a leak problem if even minor accessories for Unpacked 2021 are leaked within 48 hours of the event. It is also fighting an endless battle, considering how fast the tech industry moves these day. This is certainly the case with the long-awaited S Pen Pro. Some details and its appearance have been revealed unofficially even before Samsung has a chance to speak.

When Samsung launched the Galaxy S21 Ultra in January, the name S Pen Pro was revealed. It also came with its own S Pen. It’s been eight months since then and it seems that Samsung took that long to make it happen. This might have been worth the wait as it may have been the most significant change Samsung made to the S Pen since its rather ineffective clicker mechanism.

Recently, a short video clip was posted showing the S Pen Pro from a 360-degree angle. A small light at the tip of the function button, which is located near the tip, makes the S Pen Pro stand out from the rest. This suggests that the pen has a rechargeable battery. The pen also appears to have a slider at its top, whose function is unknown.

Another tip suggests that this could be a Bluetooth toggle. This would be odd, but plausible. The latest Galaxy Note S Pens have Bluetooth functionality. However, these don’t have to be manually turned off or on. This leak also shows that if Bluetooth is on/off, then there should be a pairing button.

The S Pen Pro still has some pieces missing, such as compatibility with the Galaxy Z Fold 3 or the Galaxy S21 Ultra. However, there might be an additional S Pen made for the foldable phone. These questions will be answered quickly as Samsung‘s grand launch is only a day and few hours away.