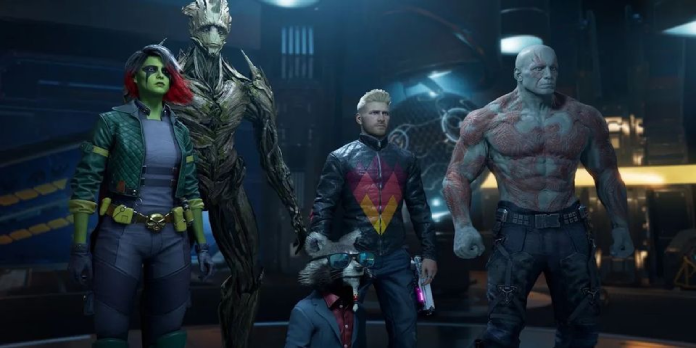 The costumes from Marvel’s Guardians of the Galaxy have leaked, displaying various cosmetic pieces that represent the team’s comic and live-action background.

Every cosmetic garment in Marvel’s Guardians of the Galaxy has been released, revealing different styles from each character’s comic and film history. The player assumes the role of Star-Lord in the upcoming sci-fi superhero game created by Eidos-Montréal and is tasked with leading a squad of extraterrestrial outlaws. The game will contain a variety of skins for each character, with many of them based on their live-action appearances in recent MCU films or influenced by comic clothes.

Marvel’s Guardians of the Galaxy, like other Marvel games like Marvel’s Spider-Man and Marvel’s Avengers, will have a variety of clothes for each hero. Many of these appearances will be based on specific designs from Marvel Comics history, and the game’s reconstruction of these clothes appears to be extremely realistic. Gamora, for example, will be able to dress up in clothes based on numerous comic storylines, such as Black Vortex Alpha from 2015, Infinity Gauntlet from 2015, and the Gamora solo series from 2016. The game will, however, incorporate the character’s immensely popular appearances from the Marvel Cinematic Universe. The MCU skin for Drax has already been released, and it closely resembles Dave Bautista’s live-action portrayal of the alien warrior.

YouTuber Somewhat Awesome Games has shown every cosmetic skin used in Marvel’s Guardians of the Galaxy in a purported leak. All five members of Marvel’s misfit squad have several skins to choose from; however, Star-Lord’s playable character has the most. Many of the clothing are based on specific comic events, such as Groot’s attire from the Annihilation: Conquest event in 2007 or Drax’s suit from The Thanos Imperative in 2010. Each character also has a single MCU-inspired skin and several original designs made particularly for the game by Eidos-Montréal. Each outfit also comes with an in-universe description and a source of inspiration, which is a little but significant addition.

Marvel’s Guardians of the Galaxy will feature a cast of characters from the pages of Marvel’s history, as well as different comic-inspired ensembles. The five Guardians will be at the centre of the game, but other supporting characters will also be prominent. Mantis, who is well-known in the comics and the MCU as a member of the Guardians, will appear as a non-player character in the game. Cosmo, the psychic dog and Worldmind, an advanced artificial intelligence, will be among the supporting characters. Adam Warlock, a massively powerful entity from the Marvel universe, appears in Marvel’s Guardians of the Galaxy. However, it is uncertain whether he will be an ally or an enemy of the Guardians.

Also See:  How to Add Commas to Numbers in Power Bi

Each Guardian’s comic book and live-action history appear to be honoured in Marvel’s Guardians of the Galaxy. Each outfit is one-of-a-kind, and they’ve been faithfully adapted from the comic book to the gaming world. Each hero will have their costume, while several team-wide sets will allow players to create a uniform look for their whole squad. Marvel’s Guardians of the Galaxy may precisely capture the essence of the outer space squad by embracing the team’s history and personality.

On October 26th, Marvel’s Guardians of the Galaxy will be released on PS4, PS5, Xbox One, Xbox Series X/S, Nintendo Switch, PC, and GeForce Now.