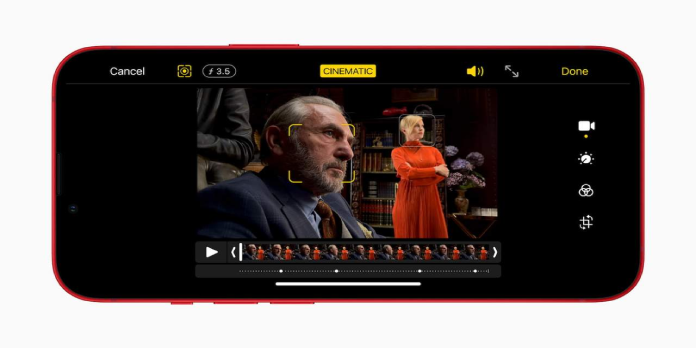 Apple today announced a new feature for all upcoming iPhones during the iPhone 13 unveiling event. Cinematic mode allows iPhone 13 users to create professional-looking videos with a rack focus effect. Apple presented a compelling case for Cinematic Mode by showing off a short film entirely shot on the iPhone 13 during the presentation.

The focus of that short film, dubbed “Whodunnit”, is clearly on Cinematic mode and its transitions. It frequently shifts focus between a subject in the foreground or a background subject (or vice versa). Apple has posted the short film it shot on its YouTube channel. We’ve embedded it below to show Cinematic mode at full force.

Apple claims that Cinematic mode records in DolbyVision HDR. The machine-learning algorithms of the Cinematic node automatically adjust focus while you are shooting. However, the most exciting thing about this feature is that you can also make depth-of focus changes after you have recorded.

If your subject is looking away from the camera and the autofocus change does not occur, you can apply the adjustments in focus later. Apple claims that the bokeh level can be adjusted in Photos and iMovie iOS. It will also be available in iMovie macOS and Final Cut Pro.

It sounds great. However, Apple’s announcement today states that Cinematic mode videos will only be shot at 1080p at 30 frames per second. Check out the timeline for more information about today’s Apple unveiling, including pricing details and release details for all new iPhones.