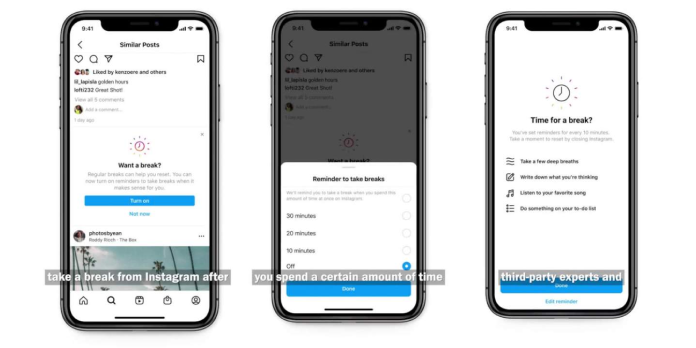 Facebook and Instagram have lately been under fire for purportedly prioritizing revenues through network traffic over users’ mental health, particularly among younger users. Although Facebook has categorically disputed the allegations, Instagram has pledged to introduce features that would look at the very least attempt to keep users psychologically sane. The first of these tools is currently being rolled out to a select group of users to remind them to take a break from scrolling through their feed.

“Take a Break” does exactly what it says on the tin, encouraging Instagram users to take a break now and again. Of course, this applies to individuals who are highly hooked to using the social networking app for more than a few minutes at a time. While it is beneficial, a few flaws might make it less successful, but these can be worked out before it is sent out to all users.

For one thing, this is still an optional feature that you must actively enable rather than being a default, which is acceptable given that this is still a voluntary experiment. However, Instagram will almost certainly have to activate it by default when it launches or prompt users to choose their time limit when the feature is ready for it to be functional. There are currently just three preset periods of 10, 20, and 30 minutes and the option to turn off the reminder entirely.

Instagram should probably come up with a solution to make taking a break mandatory. Users can easily disregard the reminder and continue scrolling during this test run. Given the nature of humans, this effectively negates the objective of advising users to take a break.

We started testing a new feature called “Take a Break” this week. This opt-in control enables you to receive break reminders in-app after a duration of your choosing.

I’m excited to dig into the results & hopefully launch this sometime in December. ✌🏼 pic.twitter.com/WdSTjL6ZdH

The most important caution is that this “Take a Break” reminder is currently an experiment that might be canceled depending on user response. However, if everything goes well, Instagram intends to make it available to the entire public by December, just in time for the Christmas photos to flood social media.

iCloud Drive Not in Finder

Why Is My iPhone Asking For The Wrong Apple ID? Here’s...

How to Use WhatsApp