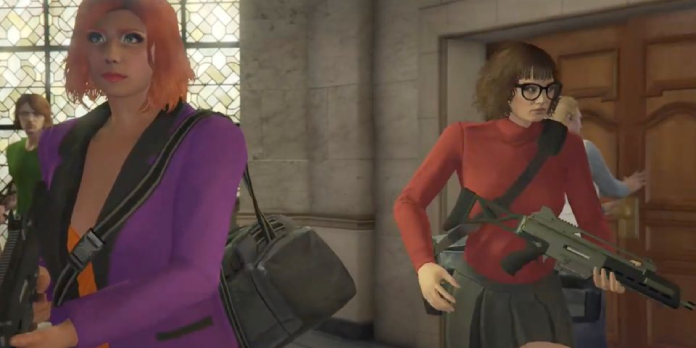 Except Scooby-Doo, a Reddit user, recently posted a video of their Grand Theft Auto Online bank robbery crew dressed up as the Scooby-Doo gang – the video features the entire Mystery-Machine-driving team: Shaggy, Fred, Daphne, and Velma. However, thanks to GTA Online’s character customization features, it appears that the four characters left behind are solving mysteries instead of living a life of crime.

Players can band together in GTA Online to wreak havoc across the massive open-world map of Grand Theft Auto V’s San Andreas. Racing together, robbing banks, competing in team deathmatches, and visiting penthouses are just a few of the many options. Since its release in 2013, Rockstar has been steadily updating GTA Online. As a result, deep customization options, ranging from character creation to the Content Creator tool that allows players to design their maps, are available alongside the ever-expanding features of GTA Online provided by the developers.

GOLDVILLAIN, a Reddit user, recently demonstrated their use of character customization by deploying characters that resembled the Scooby-Doo gang for a bank robbery. The four human Scooby-Doo characters enter a bank, weapons at the ready, the entrance zip-tied, and their money-bags ready to be filled with loot, in a video titled “scooby snax don’t come cheap.” It’s difficult to ignore their uncanny resemblances to Scooby-Doo characters, with each character looking like a stylishly gritty version of their iconic selves. Fred has his movie-star blonde hairdo, Velma has her glasses, Daphne has her orange hair and purple ensemble, and Shaggy has his mop-like hair and is dressed in his green shirt. Hair. The characters are so similar to Scooby-Doo that seeing them all carrying guns – or Shaggy’s arms covered in tattoos – is jarring. They’re participating in one of the cooperative heist missions in GTA Online.

This isn’t the first time a familiar face has been cast in an unfamiliar role in GTA Online. While it’s unlikely that this lovable ragtag group of morally righteous mystery solvers would resort to a life of violent crime in the Hanna-Barbera animated universe, it’s even more unlikely that the crew would get away with their heist. Some users noted the crew didn’t bother masking themselves until after entering the bank. It doesn’t help that their clothing is also easily identifiable.

GTA Online, Rockstar’s online counterpart to Grand Theft Auto 5, has flourished in the years since its initial launch in October 2013, with GTA Online becoming an enormous success for the studio and showing no signs of ceasing updates in the foreseeable future. As a result, Grand Theft Auto Online appears to be entertaining its players even as it approaches its eighth anniversary.