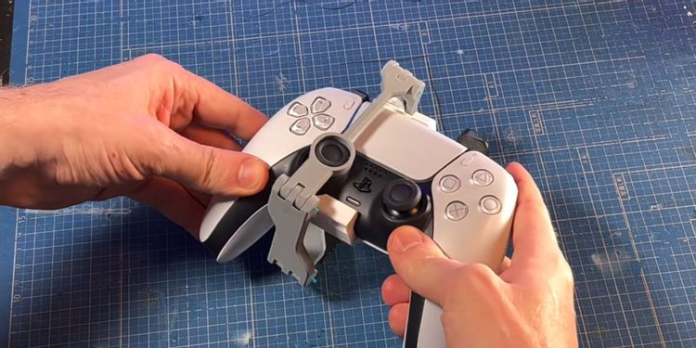 In the lack of an adaptable controller for PlayStation, a skilled artisan created a DualSense controller mod that enables one-handed play on PS5.

YouTuber Akaki Kuumeri used a 3D printer to create an outstanding one-handed controller adapter for PS5’s DualSense as part of a controller mod contest. Even though Sony and several of its first-party studios continue to lead the way in terms of in-game accessibility features, the tech titan is undoubtedly behind in terms of hardware. In September 2018, Microsoft, for example, released the Xbox Adaptive Controller, which was designed to meet the demands of players with limited mobility worldwide. Many people are disappointed that the PlayStation side of the aisle has yet to produce a comparable gamepad.

Also See:  Snapdragon 895 GPU teased to get a major upgrade

PlayStation has shown little interest in manufacturing modified versions of its controllers over the years. The hardware maker released the back button attachment for the PS4’s DualShock 4 was released in early 2020 by the hardware maker. Fans hoped that a comparable add-on would be released for the DualSense, but the only adjustable controllers available for PS5 are third-party options like SCUF’s high-performance Reflext gamepad. Fortunately, there is now a fan-made solution for PS5 users wishing to invest in accessibility-friendly controller options.

YouTuber Akaki Kuumeri (via Eurogamer) constructed a one-handed controller adapter for the DualSense while competing in a snap-on controller mod contest. The snap-on device is designed to fit over the left analog stick and has a rubberized “shoe” underneath that right-handed players can rest on their thighs. The adaptor can do the work of guiding the left stick by simply moving the controller. The L1 and L2 buttons are repositioned close to R1 and R2 in this patch for added convenience. Akaki also created a component that rests atop the DualSense and allows one-handed controller users to access all four face buttons with ease. The YouTuber used a 3D printer to create the mod, then shared the design on PrusaPrinters for everyone to see. In the video below, you can see the one-handed DualSense in action:

Akaki’s PS5 DualSense controller patch could presumably allow for more accessibility choices on the device. Given that Sony has yet to bring such a device to market, perhaps other talented designers will take the lead on this front as well.

On the other hand, the hardware maker isn’t skimping on color options for the DualSense. Cosmic Red and Midnight Black were released as color variants last year. Nova Pink, Starlight Blue, and Galactic Purple, all priced at $74.99, have been added to the DualSense family this month.

With Attack of the Elves, Battlefield 2042 embraces the holiday spirit

Crysis Remastered is heading to Steam at long last