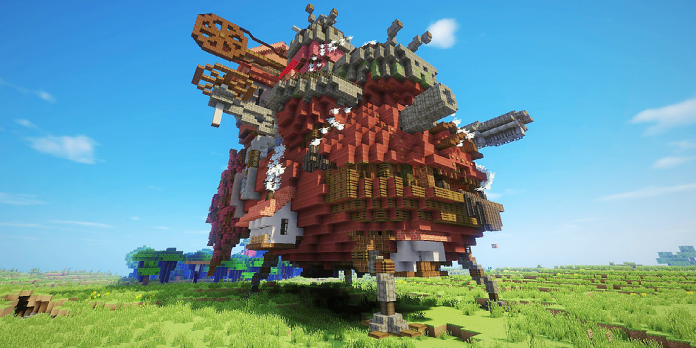 A Minecraft user has shared their stunning creation of the titular castle from Studio Ghibli’s Howl’s Moving Castle on Reddit.

Minecraft gamers continue to dazzle the internet with their stunning creations, including one that features the eponymous castle from Studio Ghibli’s Howl’s Moving Castle. With its unique ideas and aesthetic execution, the Minecraft community is always coming up with new ways to wow its audience. This design, which transforms the spectator into a fish in a tank, is especially avant-garde compared to more usual stunning builds. On the other side, recreations of real-life locations or works of art and structures based on other popular games have grown highly popular.

Smart players have begun recreating scenarios or locales from movies as of late. Extremely detailed Star Wars sets are becoming increasingly popular, and remarkable recreations of Monty Python sequences have recently become popular. Thanks to this new pool of possibilities, the Minecraft community has opened the door to a massive reservoir of creations, which are now beginning to surface. This reconstruction of Monty Python’s Holy Grail’s French taunting sequence illustrates these new types of builds.

A Reddit member recently shared their incredible recreation of Howl’s Moving Castle, the fanciful building from Studio Ghibli’s film of the same name. Smoke billows from the castle’s numerous chimneys, raising the question of whether there is a genuine fire inside playing the part of Calcifer or if the builder was simply meticulous.

In the six screenshots shared, the castle appears to be in motion, halfway across a river. Though moving the castle would need some impressive Redstone skills, the tower itself flawlessly reflects the original’s cobbled-together appearance, appearing to be constructed completely from scraps collected in some scrapyard. Many of the castle’s distinguishing characteristics are present, including the wing-like fins, back door, and modest porch from the film. Although there have been countless Minecraft versions of Hogwarts, this is by no means the first movie castle to be created in Minecraft. It may be the first of a moving castle (at least in theory, if not in practice).

Hayao Miyazaki has directed several gorgeous films, with Howl’s Moving Castle being one of the most well-known. While impossible to fully represent in Minecraft’s aesthetic style, the film, like many Studio Ghibli films, generates a wonderful sense in its viewers and is given a highly respectable attempt in this outstanding build, which nonetheless manages to very faithfully recreate the essence and shape of Howl’s Moving Castle.