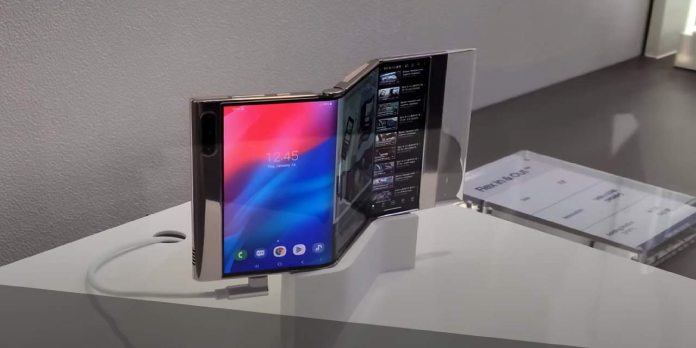 Samsung has been experimenting with foldable displays on devices of all sorts over the past few years. As we’ve seen with the Samsung Galaxy Z Fold 3 and therefore the Samsung Galaxy Z Flip 3 released this past week, the company’s already reached some extent where consumers can use this tech in smartphones and smart devices – they’re able to roll. But the experiments continue, and in the week, Samsung’s able to boast a double-folding display that folds out like no other phone on the market today.

Samsung calls this a “multi-foldable” or “multifoldable” device. This device is identified – still as a prototype in testing – because of the Samsung Flex In & Out. However, it’s unlikely we’ll see the device appearing in stores with said name. Therefore the design remains far enough far away from the deliverable reality that it’s doubtful this may appear as if the device you’ll be ready to buy.

NOTE: We saw a teaser for this device – just a photograph – at SID 2021. this is often the primary time the device is out on the show floor, operational to a point.

The exciting bit here is the indisputable fact that we’re close enough to a final product that Samsung is prepared to point out the display board to the general public. This might mean we’re still quite a half-decade far away from a final product – just like the Samsung rollable display demoed back in May of 2016. Or it might be right around the corner!

Samsung also showed off a replacement 7.6-inch foldable OLED display capable of operating at negative-4 degrees Fahrenheit without deformation. This isn’t necessarily possible with the foldable display panels in smartphones on the market today – don’t go bringing your foldable to the Antarctic!

Samsung Display also showed a replacement “AI Speaker” with a 12.4-inch Flexible OLED panel. This versatile display is shown in action, folding and unfolding via smartphone command. This is often the type of device that we might not be shocked to seek out appearing on store shelves within a subsequent year – it’s close!