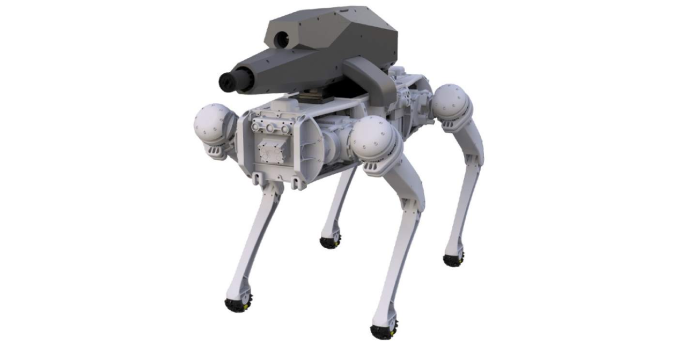 Robotic dogs now have their sniper rifle, implying that autonomous and remote-controlled warfare is on the horizon. SWORD Defense Systems’ Special Purpose Unmanned Rifle (SPUR) can be used with a variety of remote-controlled “unmanned platforms,” according to the company. The rifle was recently demonstrated on the Ghost Robotics Vision-60 quadruped.

SWORD Defense Systems claims that its SPUR sniper rifle has a variety of sensors that enable it to operate in various environments, including at night. SPUR is chambered for the 6.5 Creedmoor cartridge, but it can also be used with the 7.6251 NATO cartridge if 6.5 Creedmoor isn’t available.

The SPUR rifle has a 1200 metre effective range, a 10-round magazine, and a Cerakote GEN II NIR Ceramic Coating that helps it blend in with night vision systems. The remote sniper rifle has a Teledyne Flir Boson 640 x 512 24.4mm 18-degree HFoV thermal camera core and 30x optical zoom.

The remote operator can load the rifle safely, and access features such as clearing malfunctions and unloading the weapon. These weapons allow humans to stay at a safe distance from combat by sending machines into dangerous situations.

The company makes no mention of autonomous functionality, implying that the weapon must be controlled remotely by a human. The use of AI-powered weapons in the future is a hotly debated topic, with ethicists and others concerned about the possibility of lethal malfunctions or an inability to distinguish combatants from civilians.

How to: Fix Copy and Paste in Remote Desktop Is Not...

Google Chrome Gets New Features to Boost Your Productivity