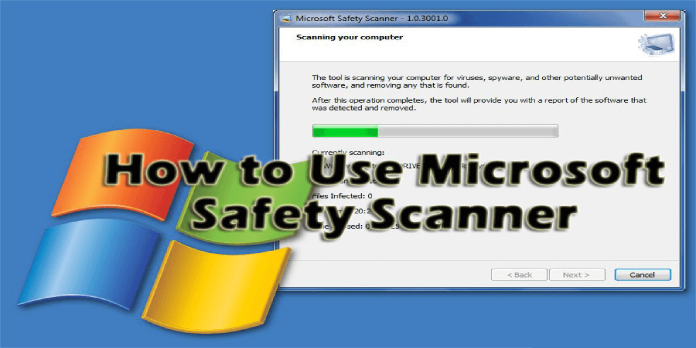 Self-sufficiency is one of Windows OS’s trademarks, as evidenced by how they continue to release items that can improve your Windows experience without the usage of third-party solutions.

For example, cybersecurity is a huge concern for everyone, and we all know that malware can be found almost anywhere, and third-party antivirus tools are not inexpensive.

If you’ve had this problem, we recommend using the Microsoft Safety Scanner.

The Microsoft Safety Scanner is a straightforward program with only one goal: detecting and removing viruses from Windows systems.

Also See:  How to: Get Rid of a Master Boot Record Virus

How can I get Microsoft Safety Scanner and install it?

One of the benefits of this instrument is how easy it is to obtain and utilize.

Examine the scan findings on the screen. View the log for comprehensive detection findings.

Yes, that is the quick answer. While Microsoft Safety Scanner will remove any malware infestations from your computer, it will not prevent malware from infiltrating your computer in the first place.

Indeed, Microsoft has admitted that this product isn’t a full-fledged antivirus solution. Anyone searching for complete protection should look into dedicated options like Microsoft Defender Antivirus on Windows 10 & 8 or Microsoft Security Essentials on Windows 7.

The Microsoft Safety Scanner is compatible with the following Windows OS versions.

Things to remember when using the Microsoft Safety Scanner

Another advantage of the Microsoft Safety Scanner is that it does not need to be installed. Simply execute the program when it has been downloaded to begin scanning your computer.

It’s a terrific solution for those who don’t want to burden their PC’s registry and DLLs with extra files because it doesn’t require installation. This also means it won’t appear in your Start menu, so remember where you put the executable once you’ve downloaded it.

On the other hand, the software cannot be updated like a traditional antivirus, so you’ll have to download it again if you want a newer version.

On that topic, Microsoft suggests downloading a new version every 10 days or so to ensure that you have the most recent supported version.

1. Is Windows Defender the same as Microsoft Safety Scanner?

2. Is there a malware scanner from Microsoft?

Microsoft Safety Scanner is a malware detection and removal program for Windows systems. Simply download it and perform a scan to look for malware, and try to undo any modifications made by threats found.

3. What distinguishes a safety scanner from an anti-virus program?

Microsoft Safety Scanner is a standalone virus and malware scanner that works similarly to Windows Defender Offline. It’s essentially an on-demand scanner that you can use as a last resort if a virus has blocked or interfered with your current antivirus software.

What’s this? from Windows10

5. is Windows defender enough in these days ? : r/Windows10

is Windows defender enough in these days ? from Windows10

How to Fix Error 944 in Google Play Store