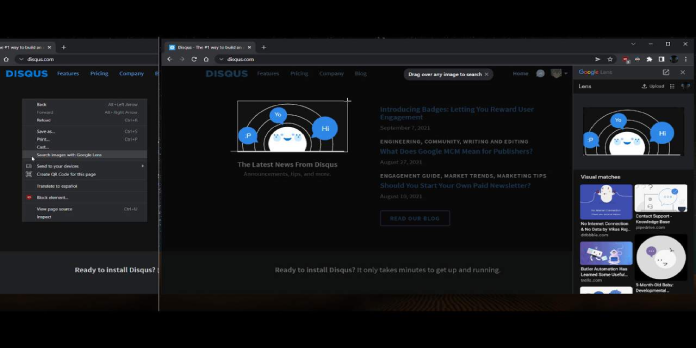 Announced almost four years ago, Lens is one of Google’s silent workers that power many of the features mobile users could be taking without any consideration lately. It powers both Google Photos’ and Google Assistant’s image recognition functionality, but Lens also has its separate app on mobile. However, it doesn’t have much of an existence outside smartphones, but which may soon change as Google works to integrate Lens functionality right inside Search results, a minimum of in Chrome for the desktop.

Google Lens is just about the company’s showcase for several of its advanced computer technologies. It uses image recognition to spot objects and machine learning to mention relevant information about the thing. That functionality comes in handy when pointing a phone’s camera at an item or maybe a landmark, but not such a lot when you’re doing an online search on your desktop or laptop.

While Google does have a passionate reverse image search, the method is quite just a touch cumbersome. That said, Lens can still are available handy once you want to find out more about a picture search result instead of just text. Last month, it had been revealed that Google has been performing on finally bringing Google Lens to the desktop for that very purpose, and new information shows how that’s getting to work.

Reddit user Leopeva64 reveals that Google Lens searches are often initiated by right-clicking on a picture or a part of the search result page. Users will be given a rectangle that they will resize to pick a neighbourhood of the page. Once they release the mouse, Lens’ search results will appear during a Chrome sidebar on the proper, almost like where Chrome shows its Reading List.

It’s a welcome addition to look functionality, especially since you don’t need to go the detour of taking a screenshot or downloading the image to upload it to Google’s reverse image search. At the instant, however, the rollout schedule for this feature remains up within the air, and it’s unknown if it’ll be a Chrome-exclusive or a more generic Google Search function.