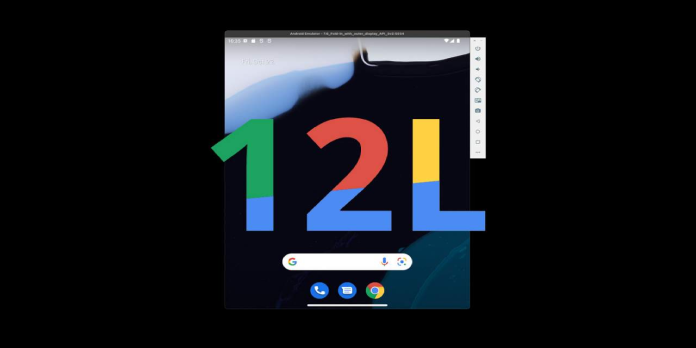 Google has officially released Android 12L, a new version of Android designed for large monitors. They’ve sent out a statement that states Android 12L is “a unique feature drop” on the one hand and “an OS suited for large screens” on the other. Android 12L, according to Google, “refines the system UI” of Android 12, making it suitable for the next wave of large-screen and transforming-screen devices.

This is a one-of-a-kind release since Google does not currently have a device positioned to be an ideal piece of hardware for running the software they’re demonstrating. Normally, Google would show off a new version of Android before releasing it as a Developer Preview, allowing devices like the Pixel phone to run the OS before the rest of the world.

Because there is currently no large-screen Android 12 device that Google can target with this software, it is being released to developers as an emulator with Android Studio. This means that a developer will use Google’s Device Manager software to run the OS as a virtual device on their desktop PC.

Also See:  The 5-Year-Old Fairphone 2 Is Getting Updated to Android 9

Surprisingly, Google’s emulator literature recommends that users choose the Pixel C from the Tablet category when creating a new virtual test device. They also propose that the developer choose the phone category’s “7.6-inch Fold-in with outside display.” This may be seen as a possible prototype for Google’s first foldable tablet. However, Google has clarified that no such device exists at this time.

A two-column layout for Quick Settings and notifications, optimization of the screen grid for foldable, and a new “refined” fold-unfold transition are among the features of Android 12L.

In landscape mode, Android 12L adds a new taskbar to the bottom of the OS screen. In this scenario, a taskbar is a black bar on which various apps are displayed for quick tapping and launching. This taskbar looks to work in a split-screen manner that, once again, maximizes the screen’s efficiency.

This is just the start. Google will also begin deploying features announced earlier this year, such as the Google Play Store’s large-screen-specific app rating for apps of all sizes.

Also See:  How to Screen Record on Android

Developers can get early access to Android 12L by going to the Android 12L documentation website today, before the official debut in early 2022. Now, all we have to do is cross our fingers that this doesn’t end up like Android 3.0 Honeycomb, which saw device makers and developers alike attempt to adopt “tablet” capabilities for their smartphones regardless of screen size — what a disaster!

The Android 12L developer preview timeline, according to Google, is relatively short. Developer Previews begin in October (right now), Beta Releases in December, and the final green phase leading up to the final public build lasts from January to February, with a possible March release date.