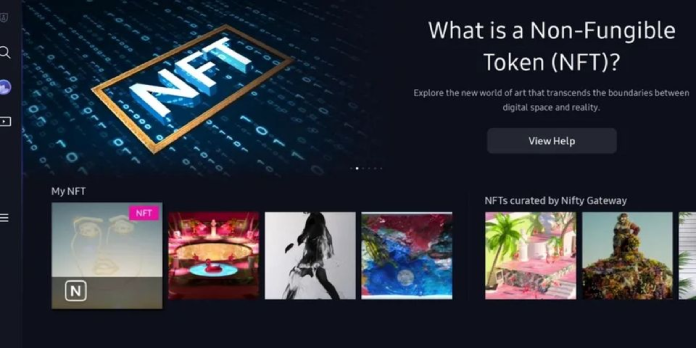 Samsung will include support for exploring and trading NFTs in its smart television portfolio, available in 2022.

Samsung has revealed that its smart television lineup, delivered later this year, will feature NFT. It has only been a week since the year 2022 began, and Samsung has already unveiled a slew of new products. Samsung, for example, recently unveiled the Galaxy S21 FE. The Galaxy S20 FE Fan Edition was released in 2020 as a successor to the Galaxy S20 FE. Samsung has also announced the release of three new gaming monitors.

Samsung also promotes new goods through its Creative Labs division, which has come up with several items and ideas this year, including the ZamStar smart guitar and a smart speaker that directs audio toward the listener. These items will be on display at CES 2022 in Las Vegas. However, it remains to be seen if they will break into the mainstream consumer electronics industry.

Samsung announced in a press release that their TV lineup for 2022 will include NFTs. Samsung has incorporated native support for browsing, purchasing, and displaying NFTs on their televisions in response to the growing popularity and demand for NFTs. Samsung is the world’s first company to develop televisions that display NFTs. The Samsung televisions will give a platform for anyone interested in seeing digital artworks without overcomplicating things. Those who have an NFT collection and want to show it off can do so with the Samsung 2022 TV line.

Samsung‘s inclusion of this capability in its smart television lineup isn’t a fluke. The South Korean firm appears to have given this some thought. For 2022, Samsung’s Micro LED, New QLED, and The Frame lineups will include a screen calibration mechanism that adjusts display settings based on the NFT being seen. Samsung has also developed an NFT marketplace aggregator, similar to a TV-screen-based NFT explorer, that would allow customers to preview a non-fungible token before purchasing it and learn about its blockchain metadata.

The popularity of NFTs has skyrocketed in recent years. According to reports, NFT trading volumes surpassed $10 billion in the third quarter of 2021, representing a staggering 38,000 percent annual increase. Companies worldwide, like OnePlus, Nike, and Coca-Cola, are focusing their attention on the NFT sector. The Samsung NFT Aggregator Platform and Explorer will be revealed in the 2022 smart television range.