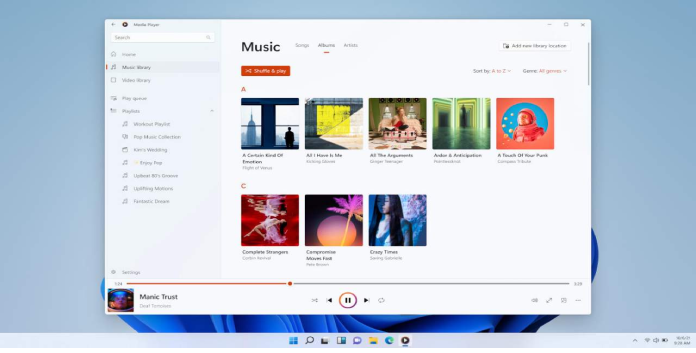 Windows has always come with various first-party utilities for the most basic needs, from calculators to media players to drawing tools, just like any other operating system. Most programmes haven’t seen a significant update in years, if not decades, such as the old Microsoft Paint, which hasn’t been updated since 2012. The next “old” software to get a makeover appears to be Media Player, which will once again be Windows’ unified audio and video player.

Windows Media Player was, in some ways, Microsoft’s counterpart to Apple’s iTunes. It offered more than just simple music or video player, as its name implied, with features for organising media collections, album cover art, and the like. On the other hand, Microsoft introduced a distinct Groove Music programme in Windows 10 and pushed WMP, as it was dubbed, to the background.

The tables have now turned, as Microsoft is launching a new Windows Media Player named simply Media Player. The UI has been redesigned to reflect Microsoft’s Windows 11 design language, which means the app’s appearance will adapt to light and dark themes, as you’d expect. When it comes to exploring your media library, though, its virtual interface is more evocative to Groove Music than the old-school Windows Media Player.

That collection can come from anywhere, albeit only local files are assured to be supported for the time being, with a fix for network media playback promised later. Album art and artist pictures are included in both full screen and mini-player modes and support for keyboard shortcuts and accessibility improvements, to mention a few.

Also See:  How to: Fix Common Minecraft Errors in Windows 10

When the generic-sounding Media Player becomes available, it will replace Groove Music, and music collections will be automatically moved. The previous Windows Media Player will continue to exist, but it will be relegated to the Windows Tools collection. The new Windows 11 Media Player is currently in beta testing, and there’s no news on when it’ll be released to the general public or if it’ll be compatible with Windows 10 PCs.

How to Write to NTFS Drives on a Mac

How to Find Out Why Your Windows PC Crashed or Froze