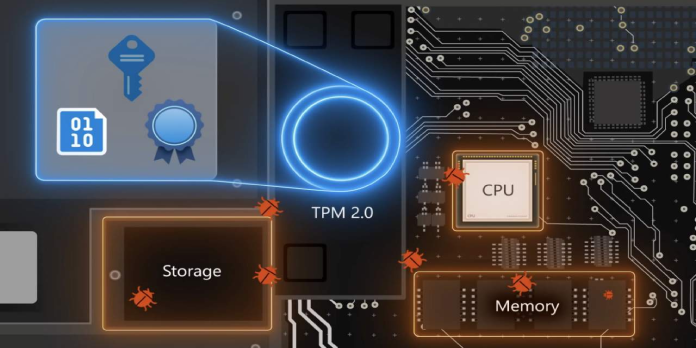 Unlike Windows 10, the upgrade problems with Windows 11 began even before it was installed on any hardware, even that of testers. As a result, many experienced and inexperienced users were perplexed by the operating system’s list of prerequisites. While Microsoft has finally clarified what it believes to be the essential minimum for Windows 11, some reservations exist about some features, notably those linked to Security. On the other hand, Microsoft is adamant about how vital TPM and its buddies are to Windows 11 security and is more than willing to show why.

TPM 2.0, or Trusted Platform Module version 2.0, is now included on many pre-built PCs from the past two or three years, but there is still plenty of space for doubt. For example, some may have the hardware installed but disabled, leading owners to feel they do not meet the upgrade requirements for Windows 11. There are also custom-built PCs from the last year or two that may not have anticipated the module’s necessity shortly.

Nonetheless, Microsoft wants everyone to understand how critical the security standards in Windows 11 are for modern computing, both personal and enterprise. TPM 2.0 and the new virtualization-based Security, or VBS, are designed to reduce or even entirely prevent harmful assaults from taking root.

Security expert Dave Weston demonstrates the numerous tactics used by hackers to break Windows security, both remotely and in person, in a recent video published by the business. Weston demonstrated devices like a PCI Leech that can be used to overcome biometric authentication like fingerprints, in addition to the usual brute force hacking, ransomware installation, and remote desktop access. The latter is prevented by VBS, which isolates and hardens the operating system’s security-critical components.

Also See:  How to Set Default Apps in Windows 11

Unfortunately, specific benchmark testing has indicated that VBS has its drawbacks. The security feature appears to degrade gaming performance, resulting in a poor user experience for a Windows release that is supposed to be gaming-friendly. Microsoft is unlikely to backtrack on Windows 11’s complex requirements, but it does need to enhance its message and repair some of the problems that make Security appears to be an afterthought rather than a need.