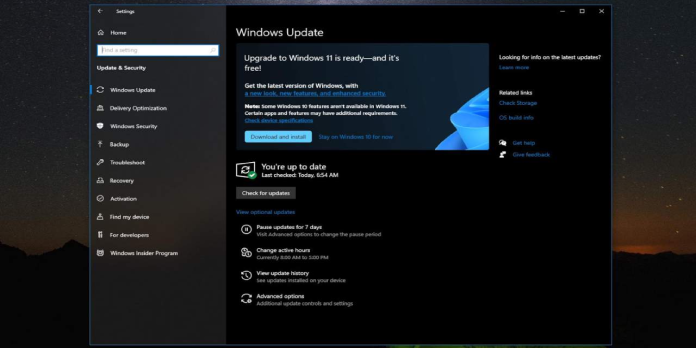 Microsoft is being less aggressive about switching to Windows 11 this time around, maybe learning from its embarrassment with the Windows 10 rollout a few years ago. Perhaps it’s because fewer machines are qualified for the upgrade in the first place, limiting its potential reach. In any case, Microsoft is gradually rolling out the update, and it has now announced that more Windows 10 customers may receive a notification that they can upgrade to Windows 11 now.

Part of Microsoft’s statement highlights an often-overlooked aspect of how the company distributes Windows feature updates. Rather than releasing the update in waves to specific markets or areas, Microsoft uses machine learning to assess whether or not certain PCs are eligible for the upgrade. This approach, in principle, accounts for the many different combinations of components and peripherals that Windows PCs can have, as well as recognized faults with specific pieces of hardware.

Also See:  The 5-Year-Old Fairphone 2 Is Getting Updated to Android 9

Because of the release’s system requirements, this type of adaptive learning has become even more critical for Windows 11. That has been a source of contention among PC owners, especially those with capable hardware that does not fulfill specific requirements, such as TPM 2.0. Those who want to install Windows 11 on their machines manually can do so at their own risk, and Microsoft even provides instructions on how to do so.

In the following days, owners of Windows 10 PCs eligible for the upgrade may receive a message. That may come as a surprise as well, given that Microsoft is rumored to have been slipping its PC Health Check program in without user consent or awareness. After a confused initial release, that app has finally been rectified.

If you haven’t received a notification despite satisfying all of the criteria, it’s just a matter of time before you are added to the list. Microsoft has given itself until the middle of 2022 to get all compatible Windows 10 PCs in line, so there’s still plenty of time. Meanwhile, those who want to stick to Windows 10, for the time being, can ignore the constant reminders. And if they don’t like Windows 11 after upgrading, they can revert to Windows 10 within ten days.