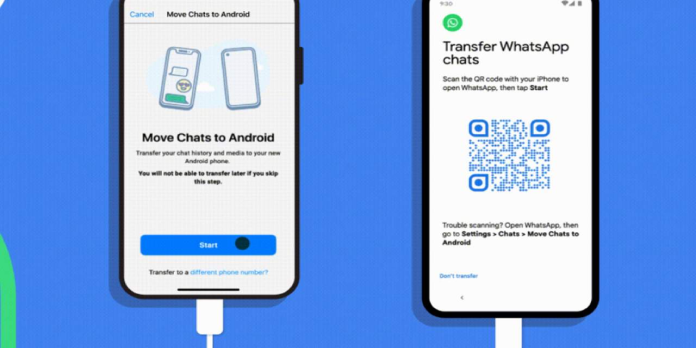 There are a variety of reasons why people become apprehensive while switching to a new smartphone. While new smartphones provide better performance and additional capabilities, transferring all your data from your old devices to the new device can be difficult. For individuals who use WhatsApp extensively for both work and personal purposes, the prospect of losing their communication history can be a deal-breaker.

Thankfully, WhatsApp has announced that it has included the option to move WhatsApp data from an iPhone to a new Android device with the introduction of Android 12. Previously, there was no way to export chat history between iPhone and Android devices. Users will need to utilise a cable to connect their iPhone to their Android device to transmit data.

Android will automatically match and install the same apps from Google Play after providing WhatsApp permission, allowing users to transport their SMS and iMessage history, as well as images, videos, contacts, calendars, and other data, to their new device. Most crucially, WhatsApp chat history may be shared, including photographs, text discussions, and voice messages.

Google claims to have collaborated closely with the WhatsApp team to develop the export feature, which will make it easier for iPhone users to migrate to Android. To get started, users will need a USB-C to Lightning cable. Users will scan the QR code on the iPhone to access WhatsApp and transfer their conversations and other stuff to the new device once the handsets are connected.

The data is shared between the devices is protected during the transfer procedure, according to WhatsApp. While the transfer is in progress, the ability to receive new messages on the old device is likewise disabled. The new transfer functionality is currently supported by Samsung Galaxy and Google Pixel phones. Furthermore, cellphones running Android 12 will be able to use the transfer feature.