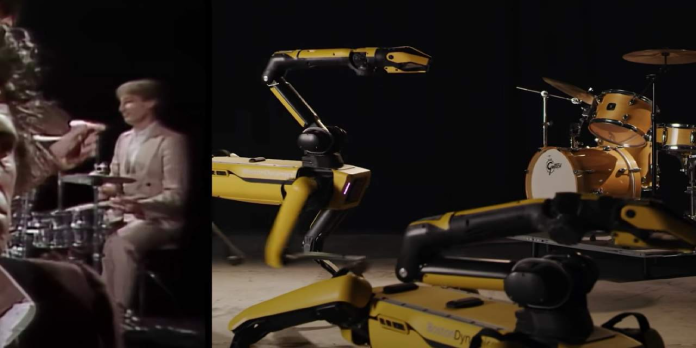 The Spot robot from Boston Dynamics is back with another dance routine, demonstrating its agility and stability by dancing to The Rolling Stones. Spot dances behind Mick Jagger, mimicking his every move, including rapidly moving its head side to side, strolling with a snarky demeanor, and even lip-syncing its “mouth” to the words. The latest film joins Boston Dynamics’ earlier dancing videos, including last year’s enormous celebration with all of the company’s robots.

The latest movie, dubbed “Spot Me Up” by Boston Dynamics, depicts various units of the company’s dog-like Spot robots, one of which is amusingly placed behind a drumset. Spot’s serpentine appendage has never been eerier and snake-like than it does in this video, giving the entire performance an uncanny valley feel.

Technically, the appendage is more of an “arm” than ahead, but it’s tough to see it as anything other than a long, nimble neck with an almost insect-like mouth at the end. Spot has previously performed more basic duties such as opening a door on its own, including twisting the handle, as well as some entertaining performances such as Boston Dynamics’ developers repeatedly kicking it to the ground.

Spot has gone a long way in the last several years, from the bulky, blocky robot presented by Boston Dynamics in 2015 to the thin, lifelike robot we see today. The business has also shown off its other robots and their evolution through time, such as the humanoid Atlas, which has gone from a cumbersome machine with many ropes to a sleek machine with a parkour passion.

Boston Dynamics envisions a wide range of applications for their robotic dog, from enterprise applications to assisting farmers with sheep herding. Though the machine’s powers are astounding, the movies are also a little disturbing, as they hint at a future in which machines may outperform humans in even the most commonplace tasks such as dancing.

Microsoft Updates Bing Search on Android With a Personalized Homepage