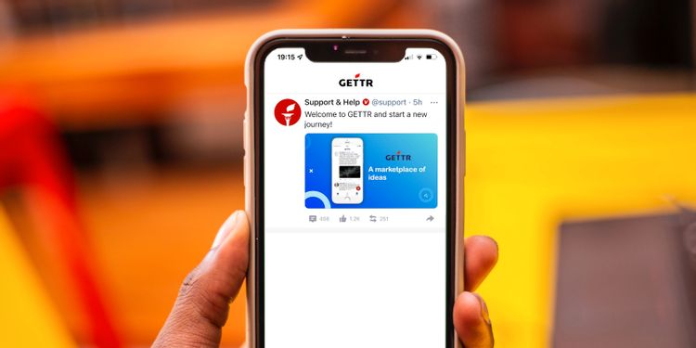 Donald Trump is back on Social Media, but this time he has his platform. President Trump’s Team launched GETTR, a new social media platform that is an alternative to existing tech platforms.

GETTR’s mission statement explains that the site aims “to fight to cancel culture, promote common sense and defend free speech. It also challenges social media monopolies and create a true marketplace for ideas.” The “marketplace of Ideas” is the main message from the statement, as it’s the slogan that is everywhere on GETTR’s brand.

Jason Miller, one Trump’s former spokespersons, is leading the new social media platform. The details about Trump’s involvement in the social media platform remain hazy, but the app is connected to Trump’s campaign team and Team. We are not sure if Trump will make an account on this platform.

We also know that Trump is always looking for new ways of engaging with his supporters online since January’s ban from all social media platforms. The former President launched his professional blog, which was met with laughter and low views.

What Exactly Does GETTR Do?

GETTR was published to the App Store and Play Store in mid-June. There was no launch campaign or event. Despite not having any advertising, the app has been downloaded several thousand times and even received some ratings and reviews.

We have seen GETTR’s mission statement. However, the App Store description describes the platform as a “nonbias social network for people around the globe”. The app’s rating is either “M” (or “17+”), depending on the current status. This means that it is intended for mature audiences.

Is Trump Back on Social Media?

Trump has not yet created an account on GETTR. Trump’s Team launched the app, but the details of Trump’s involvement are still unclear.

Maybe Trump will return to social media, or maybe he has decided to take a little longer break.

How to: Draw Something in the Browser

Can’t Disconnect From Your Vpn? Here’s What You Can Do