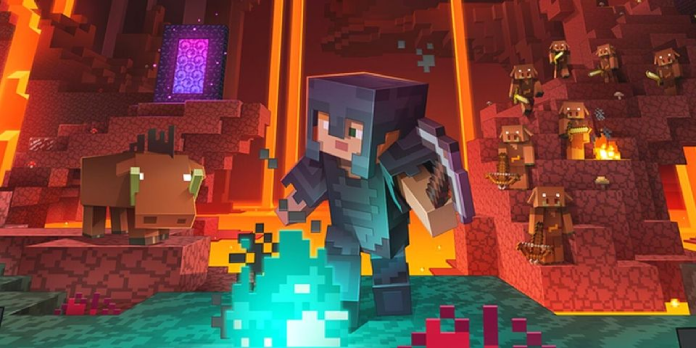 Without mods, a Minecraft player created a brilliant Nether portal optical illusion that made it appear like the Overworld.

Without mods, one Minecraft user’s Nether portal optical illusion is brilliant, making it look like the Overworld. Massive builds, innovative constructs, and stunning recreations continue to appear on the internet due to the 3D voxel sandbox that has turned into a phenomenon. A Minecraft user recently recreated a New World-inspired medieval house. The player used the expansive sandbox elements of Minecraft, as with many other projects, to capture the image and iconic art of Amazon Games’ new MMORPG.

More than its design elements, Mojang’s sandbox seems to entice players with its innovative build system, making the impossible possible. Minecraft players have created, built, and finished projects that use these features, such as a playable chess game or a flying machine in the game. The majority of the projects go beyond the scope of the survival sandbox game, broadening the nature of the game’s main goal of crafting, surviving, and eventually defeating the Ender Dragon. Some Minecraft builds, such as the Ender Pearl Stasis Chamber, assist in achieving those objectives. Others, such as a recreation of Theed City from Star Wars: The Phantom Menace, reflect a player’s imagination.

Glynnc, a Reddit user, shared a video of their Minecraft Nether portal optical illusion. Though the Obsidian frame has not been lit, the inside of the Nether portal appears to show off the Overworld from one angle. However, when the camera pans out, the optical illusion is revealed. To make it look like the Overworld in the Nether, Glynnc used a lot of glow stone and stained blocks.

I really enjoyed making this. from Minecraft

The construction appears shabby from the outside, but, as with many optical illusions, the right angle seals the deal. The Overworld is encased in the Obsidian frame, giving the impression that the Nether portal reveals another dimension. Without the use of mods, the build was completed. The Immersive Portals Mod allows players to see through portals similarly, and the mod also allows players to bypass the loading screen when passing through those portals. Glynnc’s creation, on the other hand, was made in vanilla Minecraft. The player used stained blocks to represent water in the Nether and enough glow stone to lighten the blocks as if they were in the Overworld.

Glynnc’s optical illusion build, like many other Minecraft creations, is an inventive extension of the game’s Vanilla concept. The project broadens the scope of Minecraft’s survival sandbox elements, pushing the boundaries of what can be done in Mojang’s 3D voxel world. Some players have created similar optical illusions, such as a Minecraft glass mirror effect that makes a massive cavern appear infinite. Glynnc admitted that this isn’t the end of their experiments with optical illusions in Minecraft and that they will continue to do so.

Minecraft can be played on the Nintendo Switch, PC, PlayStation 4, Xbox One, Android, and iOS.

Breath of the Wild Has Hidden Message For Players Trying To...