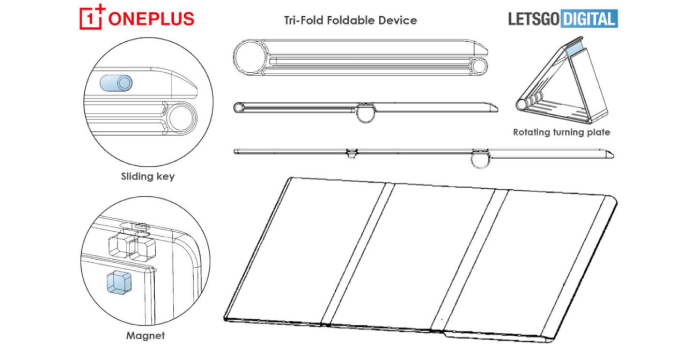 Flexible displays didn’t simply make folding phones possible. They also paved the way for new gadgets that could change their shape. Of course, the current scenario is confined to Samsung’s foldable phones, which have been on the market for almost three years, but these are far from the sole uses for deformable and flexible display screens. There’s the LG Rollable phone, which never materialized, and this new OnePlus patent, which is both more practical and impracticable at the same time.

From phone to tablet and back

The issue of screen space is one of the most pressing real-world issues that foldable devices are expected to solve. Almost everyone wants a larger screen to view their information, but no one wants a larger device that they can’t take with them. It’s a dualism that typical smartphones and tablets can’t simply solve, nor can it be handled by having two screens linked at the hip.

Also See:  How to: Fix Bixby Voice not available in your country

To some extent, the Galaxy Z Fold and related devices such as the Huawei Mate X2 and Xiaomi Mi Mix Fold attempt to provide a solution, but it comes with several trade-offs. The most pressing problem is the flexible screen’s durability, but it’s far from the only one. When folded shut, the tablet generated by an opened foldable looks nothing like the standard rectangular tablet we’re used to, yet expanding the screen longer or taller makes the gadget unusable as a phone.

Other approaches to resolving those opposed elements have been proposed, such as a rollable device that has yet to be tested in the real world. Another option is to have a tablet that folds three times to become a more conventional-looking phone, which is precisely what OnePlus is reportedly considering.

Two hinges aren’t better than one

OnePlus isn’t the only company to file a patent for a tri-fold folding handset, and its brother OPPO has done so as well. Of course, there are various ways to fold a phone, and OnePlus’ concept is a little unusual. Of course, there are two hinges, but unlike other patents such as Samsung’s, they both fold in the same direction. The thickness of the three pieces is not uniform, and the two outside panels fold over each other.

The goal of this design, like the previous tri-fold patents, is to be able to fold an extended tablet into a phone that is closer to the standard phones we have today than the ultra-thin Galaxy Z Fold 3. As excellent as that sounds, putting it into practice right now might be more work than it’s worth.

We’re still at a stage where simply folding a screen once is difficult. The risk of harming a single, long flexible display grows when it is strained. Because of the device folds, the delicate screen is exposed on the outside, making it an “outie,” which has its own set of issues, as the initial Huawei Mate X demonstrated.

It’s still around the size.

While OnePlus‘ patent attempts to address the issue of screen size, it falls short of addressing the issue of mass and thickness. While displays can be tiny and flexible, other components, particularly the battery, cannot. According to the patent, when the gadget is laid flat, practically all electronics are concentrated on one of the sides. The folded smartphone would be just as thick or even thicker than the Galaxy Z Fold 3 due to the size of the screen when folded as well as those components.

When folded and placed on a surface, the design also hints that the tablet will not lay flat when unfurled and that one section of the display will constantly be exposed. Today’s technologies and materials are far from ideal, and it creates more difficulties than it solves. Perhaps in a few years, we’ll have addressed at least the durability of flexible displays, but for the time being, patents like these will stay just that.

After all, the Galaxy S21 FE may offer one significant benefit