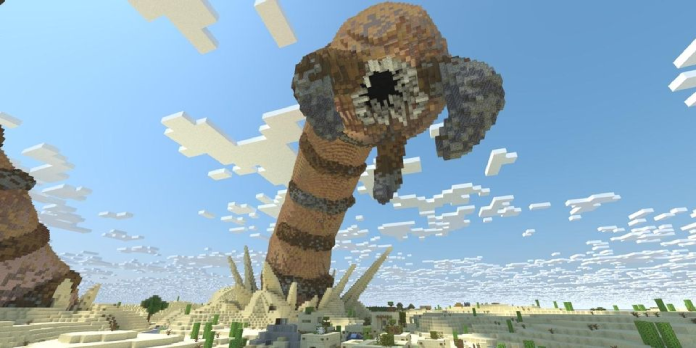 A passionate Minecraft fan created a massive sandworm that will make players afraid of destruction if they visit the desert again.

The Minecraft sandworm created by a fan is a terrifying beast that will make players avoid the desert environment. Fresh new structures, inventive initiatives, and even pop-culture crossovers are commonplace in Mojang’s 3D voxel playground. The ogre was elevated to new heights by one talented Minecraft player’s massive Shrek creation, which introduced the Dreamworks animated brand to Minecraft. After more than a decade, it appears that users are constantly coming up with new methods to expand Minecraft’s frontiers, such as creating new features or even hazardous critters to include in the game.

Mojang has been steadily adding new features to Minecraft, most recently with the Caves & Cliffs Part 2 update, which brought seven new biomes, including Dripstone Caves, Frozen Peaks, Lush Caves, and Snowy Slopes. Noise caverns and aquifers were also included, which alter the way caves generate in a Minecraft environment. The game’s next major update, The Wild Update, will introduce Mangrove Swamps, gloomy cities, and new creatures such as Frogs. Both major updates offer Minecraft new biomes and world generation methods, expanding the number of things to explore in both new and existing seeds. Despite the continual stream of new content that Mojang has added to the game and will continue to add, Minecraft players have continued to develop their unique features.

MaxUel, a Reddit member, created a massive Minecraft sandworm that looms over other players. MaxUel’s creation is meant to demonstrate what it would be like if sandworms were included as mobs in Minecraft, and the Reddit user cautioned that if the mob is implemented, players should avoid the desert at all costs. Three mandibles, around the mouth, loaded with sharp teeth, and a long body buried in the desert sands complete the sandworm design.

Mountain goats, axolotls, and glow squids are just a few of the new mobs that Mojang has recently added to Minecraft. The glow squid’s glow ink bag or the axolotl’s underwater company are two examples of mobs with distinct functions. Future monsters, such as the hostile Warden mob that will be added to Minecraft’s darkest depths, will also present obstacles. MaxUel’s sandworm resembles the Sandworm from Frank Herbert’s Dune. This aggressive and territorial monster roams the desert planet Arrakis and hunts and devours prey by vibrating rhythmically on the sand’s surface.

If added to Minecraft, the sandworm would be a hazardous mob capable of massive destruction. The mob’s massive power would be vulnerable to villages, player buildings, and perhaps the players themselves. It’s unclear whether Mojang will ever include the sandworm in future Minecraft updates, but if they do, players will have to reconsider setting up camp in the desert biome.

Elden Ring Sale Discounts Game Before It Even Releases