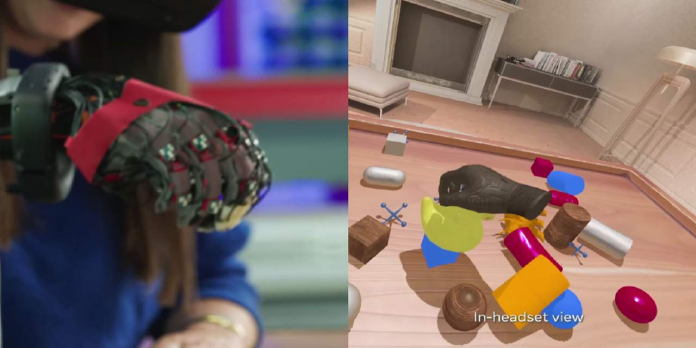 Meta, the parent company of Facebook, showcases one of the initiatives that its Reality Labs Research teams have been working on to improve virtual reality immersion. The project is a haptic glove that will allow virtual reality surroundings to feel touch in the future. The project’s purpose is to allow users to interact with the virtual environment.

The glove alluded to a future in which someone playing a virtual reality game may feel an object in their hand, such as a ball or a block, in the virtual world. They must be comfortable and adjustable, and capable of reproducing a wide range of feelings within the virtual environment. The gloves would be able to replicate tactile, pressure, and vibration sensations.

The research team claims to be in the early stages of the project, intending to pair the gloves with a virtual reality headset to enable immersive experiences. AR glasses would be able to interact with the gloves. According to Facebook, creating gloves necessitates the creation of new scientific disciplines. Its teams have spent the last seven years focusing on advancing human-computer interaction across different disciplines.

Perceptual science, soft robotics, microfluidics, hand tracking, and haptic rendering are just a few categories the research teams are working on for the haptic glove project. The focus on perceptual science is an attempt to see if haptic feedback can be combined with visual and aural feedback to persuade the user’s perceptual system that it feels the weight of an object.

Soft robotics research focuses on developing soft actuators of small, soft motors that move in unison to convey sensations to the user. The goal of microfluidics research is to create the first high-speed microfluidic processor in the world. A tiny microfluidic chip would serve as the CPU, controlling airflow via the actuators.

Because the system needs to know where to send the sensation, hand tracking is essential in any virtual reality system. Advanced hand tracking technology would allow the virtual reality system to follow the user’s hand in the virtual world and interact with virtual objects. Facebook is working on a haptic renderer that can transmit exact instructions to actuators on the hand, which is critical. The instructions would be dependent on the hand’s location and the texture, weight, and stiffness of the virtual object in the environment.

Also See:  Can’t Follow a New Steam Curator? Here’s What to Do

In late October, Facebook relaunched as Meta, intending to lead the metaverse push. Mark Zuckerberg, the business’s creator, and CEO argued that the Facebook brand was so closely associated with one product that it couldn’t possibly reflect everything the firm was doing at the time or in the future. The Project Nazare AR glasses are another device that Meta is working on. Hologram displays, projectors, batteries, radios, specialized silicon chips, cameras, speakers, and sensors are all built into the glasses to map the world around the user. The product is still in its early stages and may undergo considerable changes before it is ready for market.