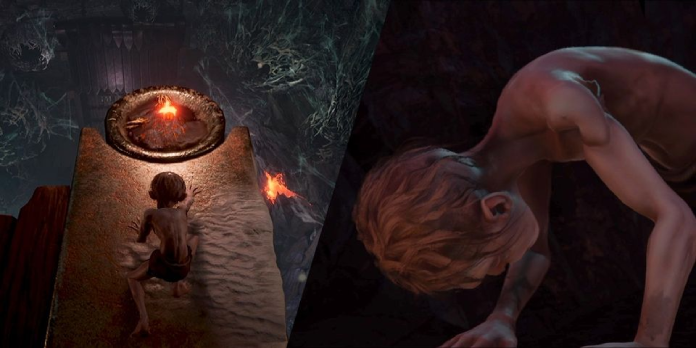 A new video for 2022’s The Lord of the Rings: Gollum premiered at the Game Awards 2021, highlighting the many sides of both Gollum and Sméagol.

With a new teaser trailer hinting at some of the character’s challenges, the Game Awards 2021 have given fans a unique peek at The Lord of the Rings: Gollum. LOTR: Gollum was revealed by developer Daedalic Entertainment in March 2019, promising a new experience in the vast Middle Earth universe that focuses on one of its most fascinating characters. It will forego the action included in other notable Lord of the Rings games like Shadow of Mordor, focusing instead on stealth mechanics that are more appropriate for Gollum’s nature.

The Lord of the Rings: Gollum was last featured on Nacon Connect, which aired in July and included a deeper look at the eponymous figure. Daedalic also gave spectators a look at some of the game’s locations, like Mirkwood and the Mines of Moria. The LOTR: Gollum video also featured the iconic faces of Gandalf and Thranduil the Elvenking, leaving many fans eager to see more ahead of the game’s highly anticipated release.

Daedalic Entertainment‘s latest LOTR: Gollum trailer shows off some of the game’s various environments, emphasising the dangers of Middle-Earth. The trailer also suggests the conflict between Sméagol and Gollum, Gollum’s two identities. The duality of the character is an ever-present dilemma, as hinted at in the latest trailer, and one that is likely to infect both the game’s storey and gameplay. With Sméagol attempting to reason with Gollum, the two aspects of Gollum play off one other in a similar fashion to Peter Jackson’s depiction in The Lord of the Rings films.

The Lord of the Rings: Gollum was supposed to be released this year, but it was postponed to allow more time in production and better fulfil user expectations. While delays are often seen unfavourably, fans have been divided on earlier teasers and gameplay, with some questioning the studio’s cartoon-like design for the famous figure. While Daedlic has yet to announce a precise release date, the studio appears content to remain with a 2022 release window, as the latest video confirms.

The upcoming Lord of the Rings: Gollum video game will be the first to feature Gollum, which has piqued the interest of many fans. Players may anticipate travelling over Middle-Earth as the character, who will use stealth and parkour moves, which hasn’t been seen in previous LOTR games. While Gollum’s TGA debut has been promised previously, the recent teaser adds to its interest in the game and its forthcoming release.

In 2022, The Lord of the Rings: Gollum will be released for Nintendo Switch, PC, PlayStation 4, PlayStation 5, Xbox One, and Xbox Series X|S.