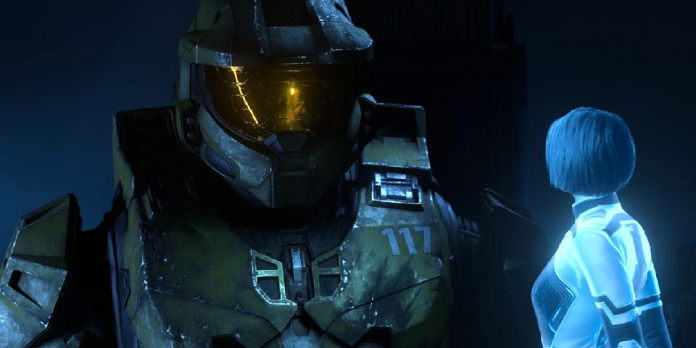 A meme juxtaposing the heights of Master Chief from Halo with Lady D from Resident Evil Village reminds gamers that he’s not that tall.

Even though the Master Chief is a towering person in the Halo universe, Lady Dimitrescu from Resident Evil Village dwarfs him, evidenced by a resurrected meme depicting the characters’ stature. Fans of the Halo series have been enjoying the Halo Infinite campaign, which was finally released earlier this month, with many new fans getting their first taste of the Master Chief adventure.

Fans of Halo have been waiting patiently for the release of Infinite, which was initially scheduled to coincide with the Xbox Series X in 2020. Following criticism about the game’s graphics, the game was postponed, which proved to be a wise option. Players now have access to the story campaign and the Halo Infinite multiplayer, which was introduced as a free-to-play component last month. Because of the free-to-play multiplayer and Halo Infinite’s inclusion in the Xbox Game Pass, the game is expected to be the first time many people play a Master Chief title.

Because of the recent release of Halo Infinite, a classic Master Chief meme has resurfaced on social media. The image, created by artists kawaiiblendrart and glitch597O, depicts Lady Dimitrescu, the tall enemy from Resident Evil Village, frightening the Chief, emphasizing how short he is in comparison. The famous fan rendering has been revived by Twitter user GameGeniPrime for anyone who may have missed it during the release of Resident Evil Village earlier this year. The image has once again been welcomed with admiration from fans.

Lady Dimitrescu, who stands at 9″6 in her base human form, is a towering threat to Resident Evil Village protagonist Ethan Winters, as well as Master Chief. In the Halo franchise, the Chief is believed to be around seven feet tall when fully clothed in his famed Mjolnir armour, easily towering above most other humans. This height disparity makes his modest presence next to Lady Dimitrescu all the more breathtaking. It sells the demonic duchess’s actual size, albeit some artistic license has been utilized to make the Chief appear slightly shorter than his canon height.

Lady Dimitrescu has been compared to Master Chief before, but seeing her hold the tank-like Spartan in her hands emphasizes how fearsome Resident Evil Village’s towering femme fatale is. Hopefully, the Master Chief is never stranded in Lady Dimitrescu’s castle stronghold, as the gothic mutant aristocrat may pose a significant threat to even the soldier who single-handedly brought down the Convenient and the Flood throughout the Halo series.