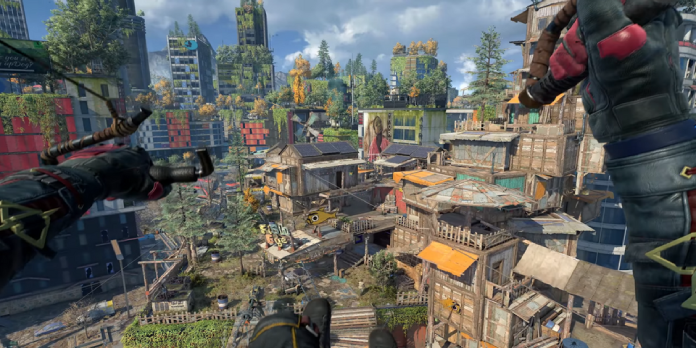 Techland has unveiled the new Dying Light 2 gameplay, allowing fans to get a closer look at the game’s deadly combat and parkour mechanics.

Techland has released the new Dying Light 2: Stay Human gameplay, showcasing the harsh fighting and new parkour mechanics in the upcoming post-apocalyptic sandbox. Dying Light 2 passed gold earlier this week, indicating that the game is ready to ship and launch on February 4 with no further delays anticipated. Dying Light 2 was initially scheduled to release a week into December. Still, it was postponed to give the developer more time to work on the game’s sophisticated gameplay features and refine the entire experience for gamers.

The zombie-filled Dying Light 2 follows freelance runner Aiden Caldwell as he completes jobs for The City’s people, set more than 20 years after the original game in an isolated urban city. Players can use the title’s enhanced parkour features and gadgets to traverse the city quickly and escape oncoming zombies and faction adversaries while completing tasks in a fully explorable setting four times larger than the original. The action-adventure game will also bring back Dying Light’s hack-and-slash combat, with a new system that requires players to scavenge for pieces to create or upgrade weapons to face new hurdles.

Players were given a more in-depth look at the game’s new combat variant and parkour moves in the latest Dying Light‘s Dying 2 Know video series, hosted by Leah Alexandra and Aiden Caldwell actor Jonah Scott. Aiden is seen defending the Fish Eye bar by dismembering and ground-pounding Renegades, hurling them off buildings, and utilizing a new variant of the running dropkick to send them flying during a never-before-seen quest called A Place To Call Home. In addition, the character may be seen making new parkour moves to traverse the game’s latest city, deactivating many rooftop canons placed up by the Renegades. Wall-running, the use of zip lines, the grapple hook, and the all-new paraglider, which allows for a more fluid-free running experience, are all explored in greater depth.

While Dying Light 2’s new fighting and traversal systems will help it stand out from its predecessor, its adaptive storyline is one of the game’s most noticeable changes. The storyline of Dying Light 2 will be branching, with choices and their repercussions determining the outcome. According to the developers, there will be three layers to this, with significant story decisions affecting the entire game and its conclusion. Player actions in particular quests might change the mission’s overall outcome, in addition to the overarching effects.

Fans of Dying Light 2 are hopeful it will be worth the wait, and the latest gameplay hints it will improve on the parkour and combat features of its predecessor. Although the game is due to be released in a few months, Techland is keeping many game secrets under wraps, with many narrative and gameplay components yet to be revealed. However, the devs continue to ratchet up gameplay announcements through the video series, so in the coming weeks, gamers can expect to witness more Dying Light 2 plot insights and deep dives.