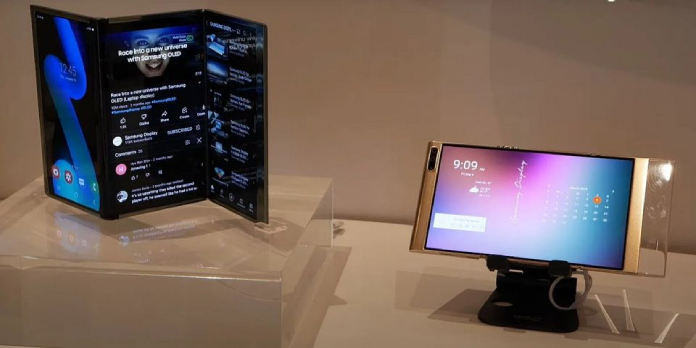 Last week, Samsung’s new multi-folding phone was initially reported when a patent application hinted the company was working on a double-folding gadget. Samsung is working on handsets with sliding and rolling panels in addition to folding phones, as revealed via a patent application last month. Samsung demonstrated the sliding device in Las Vegas this week, but no details on the company’s plans have been released. Some of these devices may take some time to reach the market. However, the new folding phones will most certainly be accessible much sooner.

Also See:  A new leak confirms the price of the Galaxy S21 FE

Samsung’s current folding smartphones can only be folded once down the centre. Still, the company has unveiled two revolutionary new designs that allow the phones to be folded twice to create alternative form factors. The more interesting of the two designs was the Galaxy Flex S that allows the phone to be unfolded in an “S” form and into a pretty large tablet, as illustrated in a YouTube video released by Abhijeet Mishra. Then there’s the Flex G, which, like the Flex S, has a few folds but folds inwards twice in a “G” form to protect the screen from scratches and scrapes.

For the time being, the specifications are unknown

It’s worth noting that the folding panels were unveiled by Samsung Display, not Samsung Electronics, the division in charge of its smartphone division. Although no official announcement was made, a Tweet from Dutch tech site LetsGoDigital in December appeared to expose some of the technical details of one of the multi-folding cellphones. The smartphone will have a secondary display on the back, a triple rear-camera setup, an under-display front camera, an in-display fingerprint scanner, an HDMI connector, and support for the S Pen, according to the tweet.

Overall, the new concept prototypes appear intriguing, but it will be interesting to see what Samsung does with them in the coming months. They are still concepts at this point, and Samsung did not reveal any concrete specifics about them at CES 2022. Given that Samsung currently has a few folding smartphones in its inventory, it will be fascinating to see how the company presents these new devices if they ever make it to market.