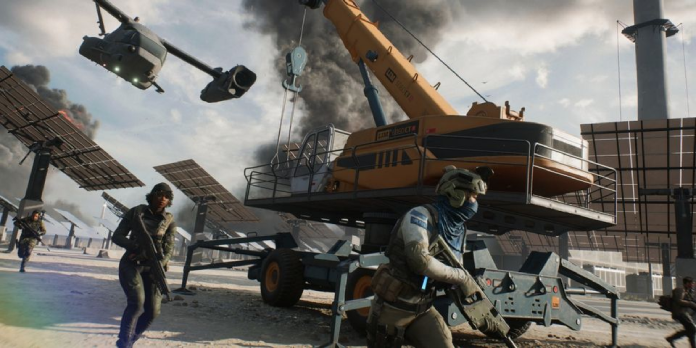 A Battlefield 2077 video contrasts pre-release footage from Battlefield 2042 to the broken launch version, which many have compared to Cyberpunk 2077.

In many ways, Battlefield 2042 was doomed from the start, especially after gamers joined the game’s problematic beta phase a few weeks ago. Many of the identified faults were promised to be addressed before release by DICE; however, the early access period began with more than its fair share of immersion-breaking errors. Early access was hampered with rubber banding, which resulted in excruciating latency and issues affecting graphic glitches, crashes, and gameplay hiccups. The day one patch for Battlefield 2042 only fixed a fraction of the issues, prompting Cyberpunk 2077 analogies that aren’t going away anytime soon.

Over the weekend, YouTuber videogamedunkey put together a three-minute video comparing pre-release Battlefield 2042 footage to the finished product. The film was named Battlefield 2077 by the YouTuber, a clever reference to Cyberpunk 2077’s failed release late last year. The marketing films for Battlefield 2042 show an intensive experience free of the issues that have plagued the game since its release. Instead of significant ground and air battles with oncoming adversaries to worry about, videogamedunkey’s essay illustrates that the actual hazards are randomly falling helicopters, doors without hinges, floors that dump players beneath the game environment, and elevators that take height a little too literally.

Battlefield 2042 isn’t horrible enough to be compared to the ongoing Cyberpunk 2077 saga on a one-to-one basis. Retailers aren’t changing their refund policies to serve disgruntled customers better, Sony hasn’t taken the game off PSN, and there’s no evidence that many users using last-gen hardware have had an unacceptably high number of crashes. Still, many are dissatisfied with the military shooter’s current status, as evidenced by the fact that Battlefield 2042 has climbed to the top of Steam’s top 100 worst-reviewed games list.

Also See:  Destiny 2's Forsaken Expansion Is Going Away In 2022

It appears that the upcoming Battlefield installment will have a long journey ahead of it before reaching its full potential. As previously stated, a day one patch fixed a few issues, but several more remain. In the following weeks, DICE expects to release an update to address issues such as missing loadouts and vehicle balancing.

Both Battlefield 2042 and Cyberpunk 2077 are now available on PC, PlayStation 4, and Xbox One.

A Last of Us 2 Player Creates a Haunting Cinematic for...